S. Korea’s fiscal deficit more than triples as of August on year

South Korea’s fiscal deficit has more than tripled over the past year after the government stretched the budget four times this year to sustain the economy from prolonged battle with pandemic crisis.

According to a report released by the Ministry of Economy and Finance, Korea’s consolidated fiscal deficit – total income minus spending – reached 70.9 trillion won ($61.7 billion) by August, more than tripling from 22.3 trillion won in the same period last year.

The sharp widening of the government’s fiscal deficit comes after the government increased fiscal spending to support businesses suffering from Covid-19 impact while overall environment to secure tax revenue has deteriorated.

Tax revenue in the first eight months of this year stopped at 192.5 trillion won, 17 trillion won less than the same period last year. Tax collection rate was 68.8 percent based on the third extra budget, which is 2.6 percentage points lower than last year.

Corporate tax revenue was 14.6 trillion won smaller and VAT 4 trillion won less this year. On top of reduced income, the government deferred tax dues worth 7.5 trillion won to relieve businesses from the hardship from virus spread.

Government debt as result hit 794.1 trillion won as of end of August, up nearly 100 trillion won from 699 trillion won a year ago. The debt figure and growth speed were both largest-ever. 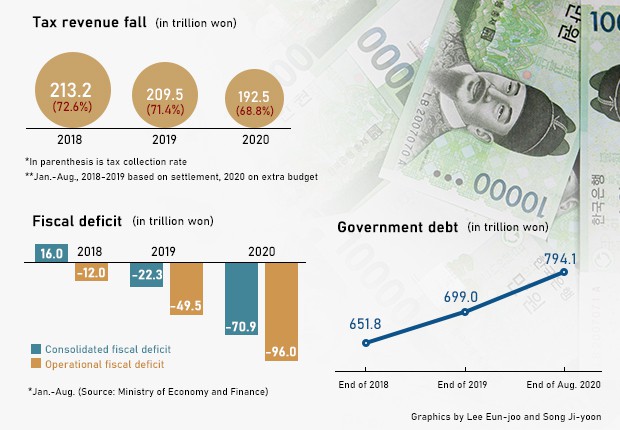 이미지 확대
The government’s increased spending and reduced income is raising an alarm over growing national debt. It also questions efficacy of non-binding fiscal rules the government announced recently to introduce from 2025.

The finance ministry recently announced to introduce new fiscal rules to prevent deficit spending by managing government debt to stay under 60 percent of gross domestic product (GDP) or consolidated fiscal deficit to not exceed 3 percent of GDP from 2025. Under the plan, the government is deemed as having satisfied fiscal rule if it meets one of the two set requirements.

The government allowed deficit ratio to reach up to 4 percent by allowing 1 percentage point upon slowdown in the economy and also an exemption upon outbreaks of large-scale disaster, war, or global economic crisis.

While planning this year’s fourth extra budget, the finance ministry projected national debt to reach 846.9 trillion won this year – 43.9 percent of GDP. In the first 8 months of this year, national debt ballooned 100 trillion won from the same period a year ago. The debt ratio versus GDP would go higher if the economy cannot grow more than 1 percent.

By Yang Yeon-ho and Lee Eun-joo