이미지 확대
South Korean exports tumbled 28.8 percent in the first 10 days of October from a year earlier due to the lengthy Chuseok holiday.

Outbound shipments in the Oct. 1-10 period totaled $9.3 billion, down 28.8 percent from the same period a year ago, the Korea Customs Service said Monday.

This was largely due to a calendar effect. The month had two fewer operating days from the year-ago period at 4.5 days due to the Chuseok holiday, which this year ran from Sept. 3 to Oct. 2.

Despite the fewer operating days, semiconductor exports continued to run at a strong pace, up 11.2 percent. 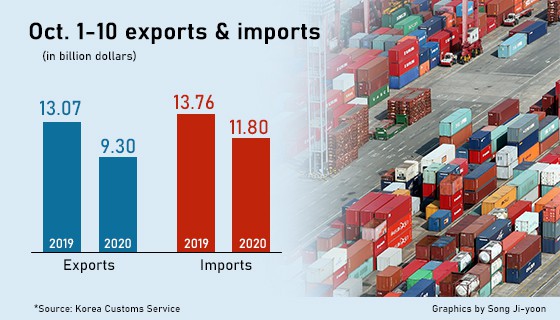 Korean exports in September had edged up for the first time in seven months on strong chip and auto demand.