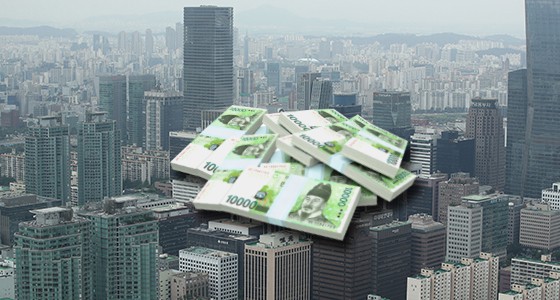 Liquid funds gained 23.7 percent in July from a year ago, accelerating by the fastest pace ever, according to data from the Bank of Korea (BOK) and Korea Financial Investment Association on Sunday.

Liquid assets refer to cash on hand and other forms of short-term capital including demand deposits and money market funds that can be easily converted into cash. After passing the milestone of 1,000 trillion won in November, liquid assets added nearly 200 trillion won this year.

Local markets have been flush with liquidity due to massive government stimulus and record-low interest rates to sustain the economy against the challenges from coronavirus pandemic. Seoul has so far unleashed 175 trillion won in coronavirus aid packages. The BOK has also kept its policy rate at a record low of 0.5 percent since May. 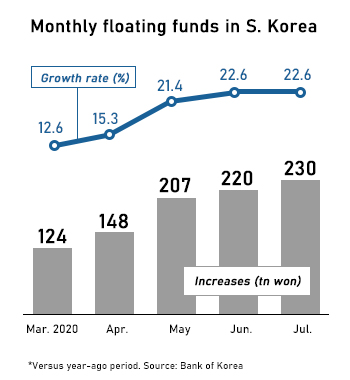 이미지 확대
The excess money, however, has not been funneled effectively into the economy. The velocity of circulation, a measure that divides the gross domestic product by money supply, fell to a record low of 0.63 in the second quarter, according to the BOK.

The currency multiplier, a ratio of money supply to monetary base that is another measure of circulation, hit an all-time low of 15.0 times in May and slumped further to 14.7 times in July.

The lingering virus threat continues to weigh on the overall economy.

Industrial output in August turned negative as the resurgence of virus cases in Korea disrupted manufacturing and service activities. Factory activity slipped 0.7 percent from the previous month, with capital investment sinking 4.4 percent. Retail sales rebounded 3.0 percent, though the gains came after a sharp 6.0 percent decline in the previous month.

“The government is pulling out all the stops but the economy is not picking up as it should due to coronavirus uncertainties,” said Kim So-young, professor economics at Seoul National University.