이미지 확대
Stock investments with borrowed money are increasing at an alarming rate especially among young investors in their 20s in South Korea in light of the retail fervor in the nation’s stock market.

According to data from the Financial Supervisory Service released by Jang Hye-young, a lawmaker from the minor liberal Justice Party on Wednesday, the outstanding balance of margin accounts as of the end of August stood at 16.22 trillion won, up 76.1 percent from late last year.

A margin account is an account provided by brokerage houses to allow investors to borrow cash to buy stocks or other financial products. The balance of margin account rose at the sharpest rate among investors in their 20s, up by 133.8 percent to 379.8 billion won ($327.3 million) in late August from 162.4 billion won at the end of 2019. 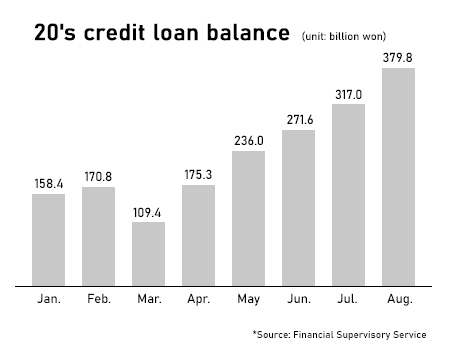 이미지 확대
Margin account balance for those who in their 20s had dipped to 1,093 billion won at the end of March when the Kospi market took a nosedive to below 1,500 at the height of the Covid-19 outbreak, but the figure grew by more than two fold from April to August amid fast recovery of the market on retail bargain hunting.

The number of stock trading accounts offered by local brokerage firms came to 71.34 million as of late August, up 10.69 million from late 2019. Investors in their 40s opened up the most number of 2.56 million new stock accounts during the period, followed by those who in their 20s and 30s.

“The rising stock investment with borrowed money by people in their 20s is worrisome,” said Jang who attributed the growth to the mounting anxiety of young people amid widening income gap and inequality.