The agency noted that the pandemic “has weighed on economic growth and public finances, but domestic control of the virus accompanied by a robust policy response have limited the severity of the deterioration in these metrics relative to other advanced economies and AA peers.” 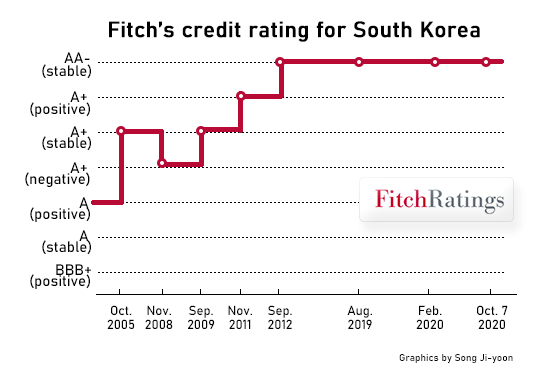 이미지 확대
Fitch’s decision to maintain AA- rating for Korea is contrary to a flurry of actions by major international credit agencies that have downgraded ratings of many major economies due to the virus-driven global economic downturn.

Moody’s Investors Service, Standard & Poor’s (S&P), and Fitch Ratings have downgraded 211 credit ratings or outlook of 107 countries. The U.K. and Canada have faced a downgrade in its rating and the U.S. and Japan in its outlook.

Fitch Ratings forecast the Korean economy to shrink by a modest 1.1 percent this year – better off than the median 7.1 percent contraction for AA economies – after reflecting the country’s “effective coronavirus containment strategy without the need to resort to strict lockdown measures.”

It, however, forecast Korea’s fiscal deficit to widen to 4.4 percent of gross domestic product this year, from a 0.6 percent deficit in 2019 due to the government’s aggressive fiscal response measures to counter the pandemic, as well as growing spending pressures from an ageing population.

Fitch Ratings also noted the stalled diplomatic efforts in improving the inter-Korean relations in the past six months, expecting delay of denuclearization negotiations after the U.S. presidential election and lingering uncertainty in the geopolitical issues.