S. Korea’s energy use down for first time in 10 yrs with factory activity worst since ‘98 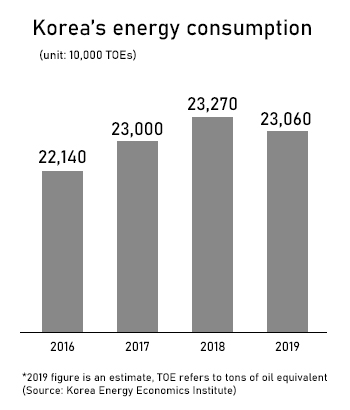 이미지 확대
South Korea`s annual energy consumption retreated for the first time in 10 years in 2019 as factory activity last year had been the poorest in more than 20 years.

In 2019, the country`s overall energy consumption amounted to 230.6 million tons of oil equivalent (TOEs), down 0.9 percent from the previous year, according to a report from the Korea Energy Economics Institute on Thursday.

Tons of oil equivalent (TOE) is a measure that is often used in comparing energy use by relating it to fuels. 1 TOE converts to 10 million kcal.

The last time when Korea saw TOE contraction was in 2009, when the country was reeling from the global financial crisis. Its energy consumption in that year was down 0.55 percent on year, but the latest figure is worse than this. The biggest drop in energy consumption was 8.55 percent recorded in 1998 in the aftermath of the Asian financial meltdown.

Korea’s output in mining and manufacturing sector fell 0.7 percent in 2019, the poorest since 6.4 percent fall in 1998 in the aftermath of Korea’s bailout crisis. Factory operation rate averaged 72.9 percent, also the worst since 1998.

Energy consumption, an important real economy indicator, had since risen in a similar curve to economic growth, but the latest figure bucked the county’s 2 percent economic growth driven by fiscal expenditure, suggesting the real economy sector was facing with more serious challenges than seen on the surface.

The think tank blamed the decline on the fallout from the trade war between the U.S. and China, the export-reliant Korea’s two biggest trading partners. The economic slowdown has forced some companies, in particular local petrochem and steel plants, to carry out massive facility maintenance to battle growing inventories. Demand for industrial electricity fell 0.8 percent last year.

LG Chem once suspended its Seosan plant last year in order to reduce losses from operation amid a supply glut of its key product ethylene.

Transportation energy consumption declined in the marine shipping sector, too. According to the institute, energy consumption for transportation by land, mainly gasoline and diesel, increased 2.5 percent in the first half of last year, but the corresponding figure by sea decreased 12.9 percent due to a drop in offshore shipment (-11.2 percent).

The economic growth outlook remains grim this year, but the institute projected this year’s energy consumption will increase 2.1 percent on year to 375 TOEs when the potential impact from the new coronavirus is not considered.