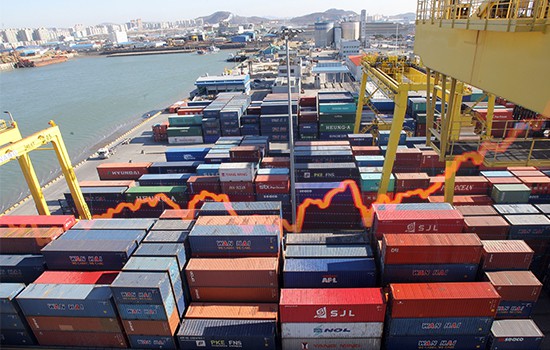 이미지 확대
South Korea’s exports jumped 7.7 percent on year – the biggest rise in nearly two years – in September, ending the losing streak for the past six months despite the protracted COVID-19 impact.

According to data released by the Ministry of Trade, Industry and Energy on Thursday, the country’s exports totaled $48.05 billion in September, up 7.7 percent from a year ago.

Exports had fallen for six consecutive months since March, but the falling rate slowed from the double-digit declines to 7.1 percent in July and 10.1 percent in August.

Daily exports averaged $2.09 billion, losing 4 percent from the previous year but marking the largest since the virus outbreak, the ministry said.

Ten out of 15 mainstay export items saw a rise in exports on year.

Imports in September were also up 1.1 percent on year at $39.17 billion, resulting in a trade surplus of $8.88 billion. The September figure marked the fifth straight month of surplus and the biggest in two years.

Korea fared much better compared to the times of previous crisis, according to a ministry official. “The rise in exports last month against the protracted virus pandemic crisis poses a relief to the country’s economy,” said Sung Yun-mo, the trade minister.