According to Statistics Korea on Friday, the seasonally adjusted mining and manufacturing output in October slipped 1.7 percent against the previous month, a sharp retreat from a 2.0 percent gain in September. Against the year-ago period, it fell 2.5 percent.

Semiconductor output rose 4.9 percent but this was not enough to offset the 4.4 percent decline in automobiles and 7.0 percent drop in electronic components. Struggles at producers under foreign ownership weighed down overall auto output. Production of electronic parts slumped as LCD display panels suffered from the global supply glut caused by the onslaught of cheap Chinese products.

Factory operation in October fell 2.3 percentage points from the prior month to average 73.2 percent, the lowest in four months. Inventory level added 0.2 percent on month and 6.0 percent on year. 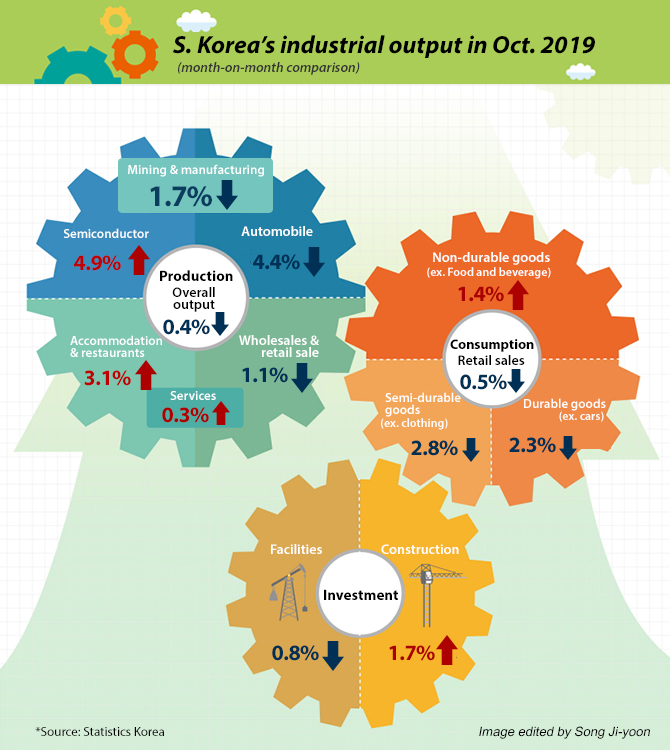 The coincident index, measuring present economic activities, slipped 0.1 point to 99.4 after staying unchanged in the previous month. The leading indicator, forecasting future economic activities, rose 0.2 point to 98.7, up for the second straight month. The last time the leading indicator increased for two consecutive months was in April-June 2017. In OECD metrics, a figure below 100 indicates the economy is slowing.