BOK stays pat to close 2019 at historic-low rate, cuts outlook for this, next yr 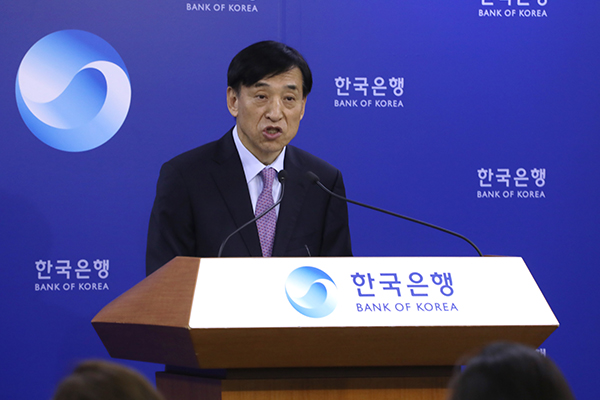 The Bank of Korea (BOK) paused in monetary action for 2019 to decipher policy effectiveness from two cuts since July – the first back-to-back easing after early 2009 in the wake of financial crisis – to save maneuvering room against stubbornly unfavorable conditions for the economy.

Although outlook for exports and facility investment is better for next year, “we cannot say the growth momentum is strong,” BOK Governor Lee Ju-yeol said Friday in a briefing after convening this year’s last monetary policy meeting.

The central bank on the same day estimated the gross domestic product (GDP) to finish 2019 at a growth of 2.0 percent, down from projection of 2.2 percent in July and gain 2.2 percent in 2020 (compared with earlier 2.5 percent). The economy would be performing its worst in a decade and hovering below growth potential rate of 2.3-2.5 percent.

이미지 확대
The policy board stayed pat on the base rate at an all-time low of 1.25 percent after 25-basis-point cuts in October and July.

The reserved growth outlook from the BOK raised market hopes for one more rate cut.

The debt market has been outweighed by supply concerns in recent months, retarding the rate cuts and reversing much of the rallies that drove bond prices to all-time highs in earlier part of the year. To finance its supersized budgeting for next year, the government has set debt issue ceiling at 131 trillion won ($111 billion) for next year.

Lee declined to comment on other monetary options such as quantitative easing the central bank could use to stimulate liquidity amid waning effect from rate cuts.

“We still have room (to deal with economic conditions) with rate policy,” he said, to suggest the BOK could venture below the current record-low.

The central bank was, however, more upbeat about inflation. The inflation, which stayed in the zero throughout the year after touching below zero in August and September, is expected to average 0.4 percent this year and recover to 1.0 percent next year.

The BOK holds the next policy meeting on Jan. 17.