According to data released by Statistics Korea on Wednesday, 73,793 babies were born in the third quarter ended September, down 8.3 percent from the same period a year ago. It is the lowest tally for the period since the agency began compiling related data in 1981.

Total fertility rate – the average number of births a woman is expected to have during her lifetime – also plunged to an all-time quarterly low of 0.88 in the July-September period, down 0.08 from the same period last year. The country’s historic low third-quarter fertility rate since the agency began compiling related data in 2008 comes after the rate fell to 0.96 and 0.89 in the third quarter and fourth quarter of last year before recovering to 1.01 in the first quarter of this year ended March. In the April-June period, however, total fertility rate fell to 0.91 and 0.88 in the following three month period.

The fertility rate for the July-September period is below half of 2.1 – a threshold for South Korea to maintain its current population of 51.7 million. 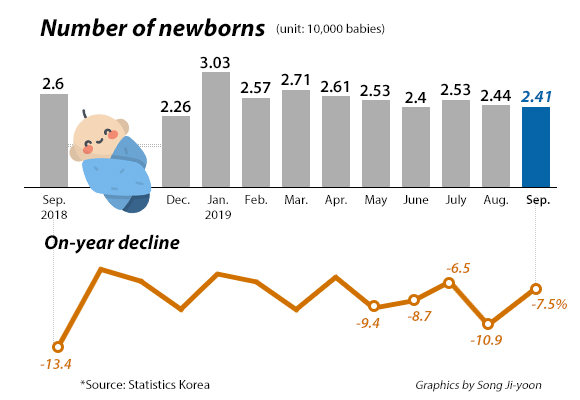 In September, 24,123 babies were born, down 7.5 percent from the same month last year. The monthly birthrate renewed lowest on-year tally for 42 straight months since April, 2016.

The tally on deaths, meanwhile, also fell 0.4 percent on year to 70,412 in the July-September period, data showed. The natural increase in population – which is the difference between the number of newborns and deaths – reached 3,380 in the third quarter, only about one third of 9,751 in the same period last year.

The number of registered marriages also continued to decline. The tally for the July-September period declined 0.9 percent on-year to 53,320, the lowest for the quarter since 1981.