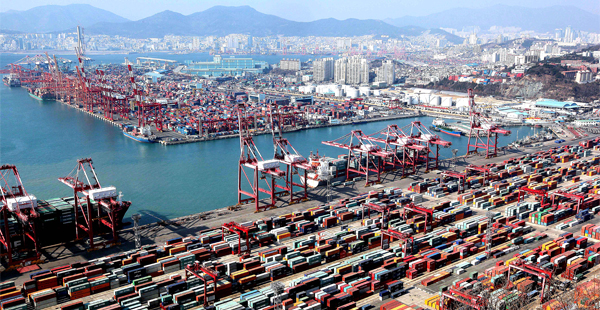 According to preliminary data released by the Bank of Korea on Wednesday, the country recorded a surplus of $7.48 billion in the current account in September. The figure is the largest since October last year and up 41.9 percent from a month earlier. But compared to a year-ago period, it sank 32.06 percent.

Goods surplus nearly doubled to $8.84 billion from the previous month but was modest against $13.01 billion a year earlier. The country’s exports tumbled 10.3 percent on year to $46.01 billion and extended their losing streak to 10 months amid lingering uncertainties in the global market from ongoing U.S-China trade disputes. Imports fell for the fifth month in a row, down 3 percent on year to $37.17 billion.

The deficit in service account came at $2.51 billion, widened from previous month’s $1.80 billion and $2.47 billion posted a year earlier after transportation account swung to a deficit of $320 million from previous year’s $600 million-surplus, offsetting the narrowed deficit in travel account to $780 million from $1.15 billion registered a year earlier on growth in foreign visitors to the country. 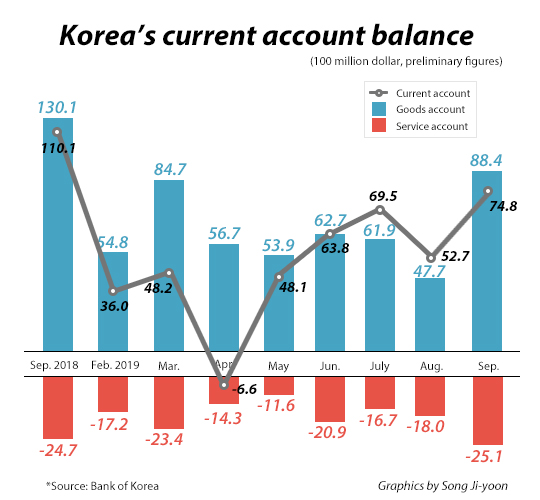 이미지 확대
The surplus in primary income account totaled $1.4 billion, up from $970 million, thanks to Korean companies’ collection of dividends from overseas operations. Income from investment grew to $1.48 billion from previous year’s $1.04 billion.

In the financial account, net assets gained $6.14 billion in September. Koreans’ overseas direct investment grew by $2.28 billion and those made by international investors in Korea were up $40 million. Korean investment in overseas securities expanded $2.30 billion but foreign investment in local securities contracted $610 million, reversing from eight straight months of growth.