이미지 확대
Mercedes-Benz benefited most among foreign car names in Korea as consumers shun Japanese brands among the choices in imported category due to protracted negative sentiment over history and trade issues.

The Korea Automobile Importers & Distributors Association (KAIDA) announced Tuesday that the number of newly registered vehicles from Japan dropped 58.4 percent from the previous year to 1,977 units on October, maintaining its losing streak since July when the boycott movement began following Japan’s export controls against Korea. Japanese brands posted a 17.2 percent year-on-year loss in sales in July, 56.9 percent in August and 59.8 percent.

Lexus sold 456 units last month, plunging 77 percent from a year earlier. Sales of Toyota and Nissan dropped 69.6 percent and 65.7 percent to 408 and 139 units, respectively. Sales of Honda fell 8.4 percent while those of Infinity increased 12 percent. 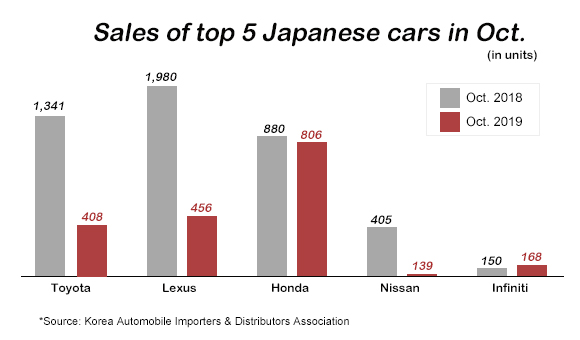 이미지 확대
From January to October, Japanese car sales fell 13.1 percent from a year ago to 30,634 units. From January to June, before the boycott movement, their sales increased 10.8 percent on year to reach a record high.

German luxury brand Mercedes-Benz posted the largest-ever sales in the Korean imported car market by selling 8,025 units last month, up 26 percent from a year ago. The brand accounted for more than 36 percent in the market. 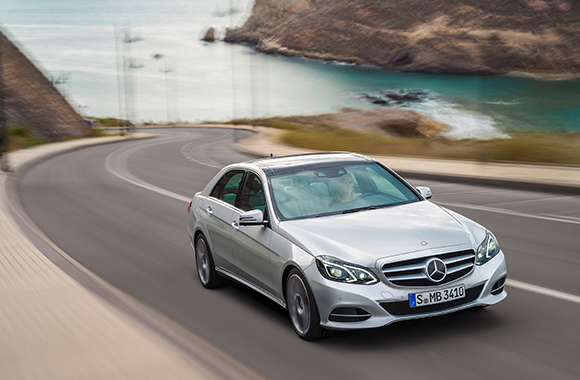 Mercedes-Benz ranked top in the local market by beating other rivals by a wide margin, including BMW that came in second by selling 4,122 units, up 93.4 percent on year. Sales of Audi that resumed shipments after completing regulatory certification process for new emission standards in Europe jumped 533.2 percent to 2,210 units. Its Q7 45 TFSI Quattro became the best-selling model with sales of 1,394 units.

Combined sales of imported vehicles in Korea rose 6.2 percent in October to 22,101 units, the highest since November 2018, according to the data. For the first 10-month period, the number of newly registered foreign brand cars decreased 13.2 percent on year to 198,194 units.