이미지 확대
Korea’s online shopping transaction hit an all-time high in the July-September period as Koreans increasingly rely on deliveries instead of going out for shopping and eating, data showed Monday.

According to data from Statistics Korea, the total value of online shopping transactions stood at 33.5 trillion won ($28.9 billion) in the third quarter ended September, up 19.4 percent from the same period a year ago. It is the highest quarterly transactions since the agency began compiling related data in 2001.

A significant surge in online shopping transactions was driven mainly by active mobile transactions that reached 21.6 trillion won in the July-September period, up 25.5 percent from a year ago, accounting for 64.6 percent of total transactions. It is also the highest amount since the agency began compiling related data in 2013.

By product category, online sales of food services jumped 83.1 percent in September against a year ago and of home appliances, electronics, and communication devices 40.8 percent, and cosmetics 29 percent.

Yang Dong-hee, director of service industry trend at Statistics Korea, said that online shopping transactions increased significantly in September amid changing consumption trends such as preference towards simple home-meal kits that has led to a surge in the value of food service transactions. Demand for price-competitive home appliances, electronics, and communication devices was also high online in September while online cosmetics transactions were led by growing number of foreign travelers including those from China. 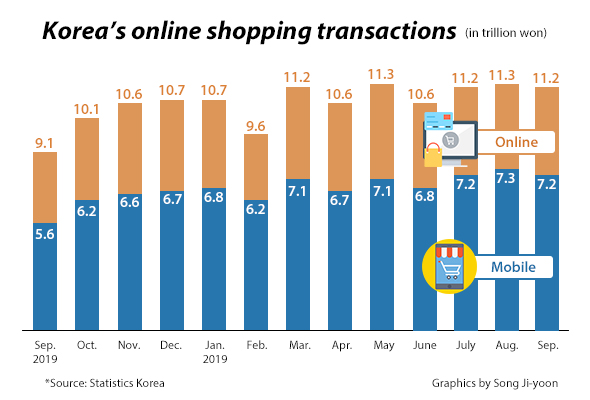 이미지 확대
The value of transactions via mobile device reached 7.2 trillion won in September, up 29.2 percent from a year ago. It is the third straight month for the value to exceed 7 trillion won. Mobile shopping transactions were led by growing demand for food services – which increased 88.5 percent from a year ago – home appliances, electronics, and communication devices (43.7 percent), and food and beverage products (27.9 percent).

Statistics Korea data also showed that overseas direct online purchases amounted to 842 billion won in the third quarter ended September, up 21 percent from the same period a year ago.

By country, the United States accounted for 48.9 percent of total overseas direct online purchases with 411.9 billion won, followed by the European Union with 194.7 billion won, China with 158.3 billion won, and Japan with 47.2 billion won.

Online purchases from Japan that had increased 32 percent in the second quarter on year, significantly slowed to a gain of 2.3 percent in the third quarter as the result of soured relationship and Korean boycott of Japanese products due to disputes over history and trade issues.

Data also showed that overseas direct online sales in the third quarter amounted to 1.5 trillion won, up 65.2 percent from the same period last year. It is the highest figure since the agency began compiling related data in 2014. Duty free shop sales jumped 75.4 percent to 1.3 trillion won.

By country, China accounted for 86.8 percent of the sales, followed by Japan, the Association of Southeast Asian Nations, and the United States. Cosmetics made up the largest share of 84 percent in overseas direct online sales.