이미지 확대
The chip downturn has weighed heavily on Korean exports this year but output and shipments of Korean semiconductors have so far exceeded the levels of 2018, the best-ever year for the country’s chip industry, data showed.

Korea’s semiconductor shipments in the Oct. 1-25 period totaled 2,556.2 tons, up 16.0 percent from the same period a year ago, according to the Ministry of Trade, Industry and Energy and Korea International Trade Association on Monday.

Chip export volume rose for the fourth straight month in October. The gains were held steady from the second half after on-year declines in January, February and June.

Production has also been robust. According to Statistics Korea, chip output in the third quarter rose 8.3 percent from a year ago, up from 7.9 percent in the first quarter and 7.3 percent in the second quarter. By comparison, the output for the total manufacturing sector including automotives and machinery equipment slipped 0.7 percent during the same period. 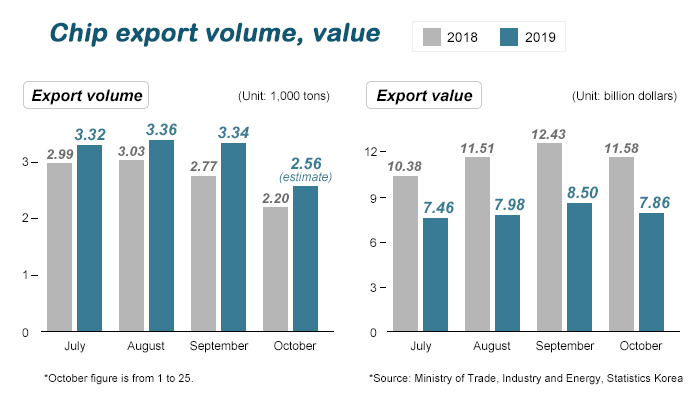 Chip exports in value terms, however, suffered from steep price declines of memory chips, the mainstay of Korean chip makers. Chip shipment in the first 10 months of the year was valued at $79 billion, down 26.3 percent from the same period a year earlier. But this was still higher than the $78.7 billion of 2017 and well above the $62.2 billion of 2016.

Experts say the worst appears to be over as chip prices have started to show signs of recovery.

Korea Institute for Industrial Economics & Trade in its recent report projected memory chip demand to rise significantly next year with the continued rollout of 5G networks, and saw Korea’s chip exports to top the 2017 figure of $97.9 billion.

Industry observers said the increased demand in the latter half was partly driven by the inventory buildup movement following Japan’s export curbs against Korea in July. Tokyo tightened export controls of key semiconductor materials and dropped Korea from its white list of countries with fast-track trade status amid a growing diplomatic spat.