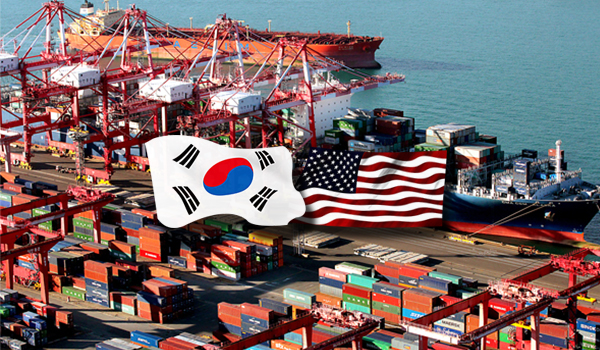 이미지 확대
South Korea’s trade surplus with the United States has decreased nearly 7 percent after the two countries revised their free trade agreement (FTA) this year upon the request of the U.S. concerning about widening trade deficit with Korea, but trade volume between the two has stayed strong overall.

According to data released by the Ministry of Trade, Industry and Energy and Korea International Trade Association (KITA) on Sunday, Korea’s trade surplus with the U.S. reached $10 billion in the first 10 months of this year, down 6.8 percent from a surplus of $10.7 billion in the same period last year.

The revised Korea-U.S. FTA went into effect on January 1 after Washington complained about its growing trade deficit with Seoul especially in the auto sector. As compared to the original deal that kicked off in 2012, the revised FTA allows the U.S. to double its vehicle exports to Korea based on its own safety standards and extend tariffs on imports of Korean pickup trucks to the U.S. to 2040 from 2021. Tweaks have also been made to the investor-state dispute settlement clause.

Since the revision in the pact, Korea has seen a reduction in trade surplus with the U.S. in the January-October period after imports from the U.S. have jumped faster than exports, the ministry said.

Moon Byung-ki, a senior researcher at KITA, said that Korea’s imports of U.S. crude oil increased significantly in line with the country’s energy diversification policy over the past several years. Imports of meat, agricultural pesticides, and medical items also increased from the U.S. to Korea, the researcher said.

The reduced surplus in trade with the U.S., however, is not a matter of big concern, said market analysts, citing that trade between the two countries has maintained robust at a time when Korea’s trade with other countries has softened. While Korea’s exports to the U.S. and imports from the U.S. both increased in the January-October period from a year ago, Korea’s overall exports and imports fell 10.3 percent and 5.8 percent, respectively, over the same period.

Moon also noted that Korea’s auto and electronics exports to the U.S. still showed strong growth during the period.

Korea’s reduced trade surplus with the U.S. is also expected to play a positive role in the U.S.’s final decision on whether to apply Section 232 tariffs on import vehicles next month. Under Section 232 of the U.S. Trade Expansion Act, imports can be limited or high tariffs can be imposed on foreign goods that are judged to threat national security of the U.S. President Trump was to deliver a decision on sweeping a tariff hike on auto imports to the U.S. on May 17 but has delayed tariffs until November 13.

Moon from KITA said that the announcement was postponed last time amid reports of possible exemption of Korea from the penalties. He noted that possibility is low for Korea to be under sweeping tariffs this time given its balanced trade relations with the U.S. Also European car makers are said to be the major target of the upcoming tariffs, he added.