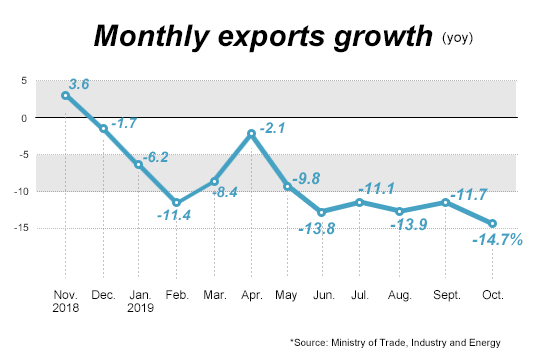 이미지 확대
Gumi, once a bustling industrial town in South Korea, has slipped deeper into recession as the country’s uninterrupted fall in exports nearly for a year has dented the economy of the city, the home of many small businesses depending heavily on the country’s major exporters.

Now in Gumi National Industrial Complex in North Gyeongsang Province, one of the industrial clusters in Korea, it is easy to find banners with factory sale and rent notices. Most of the facilities inside the complex mainly for electronic component manufacturers are shut down, and some storage yards are filled with waste.

One company in the town that refused to disclose its name said it had once raised 30 billion won ($25.8 million) or more in profit and supplied mobile components to Samsung Electronics Co., but it is now seeking to sell its factory. Factory workers at the complex told Maeil Business Newspaper on Friday that the Gumi economy is worse than that during the Asian financial crisis in 1997 that forced the country to seek for relief loans from the International Monetary Fund (IMF).

A real estate agent who asked to be unnamed said companies in Gumi are hastily putting factories on the market. Currently, the utilization rate of factories at Gumi National Industrial Complex is 76.3 percent on average with that of small businesses with 50 or fewer workers at 34 percent, becoming direct victims of the country’s falling exports.

According to Gumi customs office, total exports of Gumi National Industrial Complex reached $16.96 billion this year as of the end of September, down 12 percent from the same period last year.

An unnamed official from Gumi Chamber of Commerce said the overall business environment for companies in the electronics industry, in particular, has worsened, and some companies are considering changing their businesses.

The subdued atmosphere in the town is largely due to the continued fall in the country’s exports for eleven straight months in October.

According to the Ministry of Trade, Industry and Energy on Friday, the country’s exports totaled $46.78 billion in October, down 14.7 percent from a year ago. It marked the biggest fall in nearly four years since negative 19.6 percent in January 2016.

Korea’s exports have been falling since December, showing the longest downward period since 19 straight months of contraction from January 2015 to July 2016. The contraction in the country’s exports has also widened to double-digits since June.

Exports were dragged down largely by sluggish semiconductor shipments.

Exports of semiconductors, Korea’s mainstay item, plunged 32.1 percent in October from a year ago due to softening global demand, and exports to China, Korea’s largest export country, tumbled 16.9 percent amid ongoing trade disputes between China and the U.S.

Korea’s exports for the full 2019 is expected to contract for the first time in three years since the 5.9 percent fall in 2016.

Concerns are growing that sluggish exports will continue to dampen investment and consumption across the country. The falling exports of mainstay items such as of semiconductors and automobiles and their components are already affecting corporate spending. SK Hynix Inc. announced to cut its capital investment next year from this year and struggling auto companies have launched restructuring that includes cutting workforce.