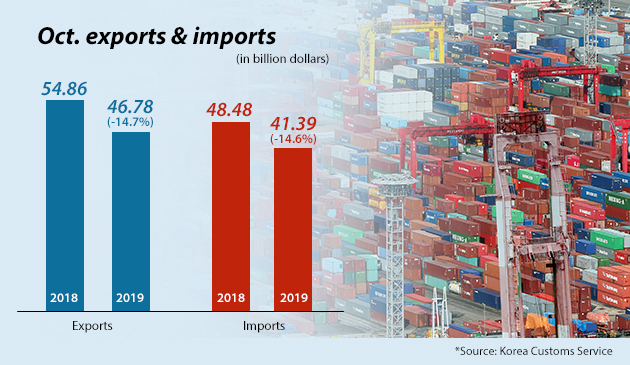 이미지 확대
South Korea’s exports sank 14.7 percent on year – the biggest fall in nearly four years - in October, on path to close the year in contraction for the first time since 2016.

According to data released by the Ministry of Trade, Industry and Energy on Friday, the country’s exports totaled $46.78 billion in October, down 14.7 percent from a year ago.

Exports have been falling on year since December, with the contraction widening to double-digits from June and stretching to the largest since negative 19.6 percent in January 2016.

Korea’s imports in October totaled $41.39 billion, down 14.6 percent from the previous year. Trade surplus reached $5.39 billion, staying in the black for the 93rd consecutive month.

The ministry raised hope for next year’s exports, citing the possibility of an ease in global trade tensions, a delay in Brexit and a recovery in global chip prices. The country’s export volume of semiconductors has been on a rise for the past four months, and ship deliveries for 2017 orders will also start next year, said a ministry official.