Korea’s inflation in Oct edges away from negative territory 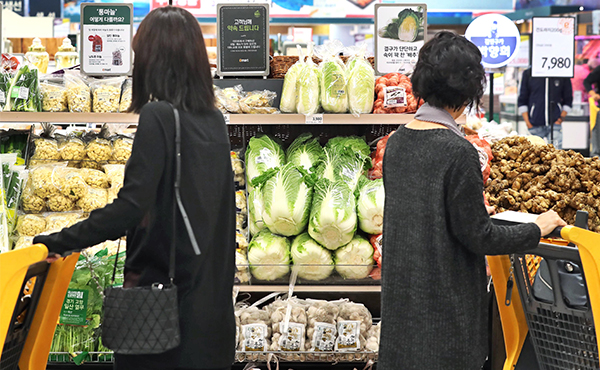 The country’s benchmark consumer price index (CPI) in October stood at 105.46, unchanged from the same month a year ago, according to Statistics Korea Friday.

While the official inflation rate appears stagnant when rounded to one decimal place, the actual figure is positive, the agency claimed as authorities have been trying hard to keep deflationary fears at bay.

Inflation has hovered below 1 percent throughout the year, the longest stay in zero territory since the 10-month run in 2015, largely due to weak fresh produce and oil prices. Price growth turned negative when it slipped 0.038 percent in August and 0.4 percent in September, marking the country’s first negative inflation reading since data releases began in 1965.

이미지 확대
Mounting deflationary concerns at home and a teetering global economy have strengthened the case for an additional rate cut. The Bank of Korea (BOK) in October reduced its policy interest rate to a record low of 1.25 percent. But experts say this could be lowered further as the Wednesday rate cut from the U.S. Federal Reserve has given the BOK room for further easing. Korea’s next rate-setting meeting is scheduled for Nov. 29.

Fresh produce prices fell 3.8 percent in October from a year ago, with the pace of decline slowed from the 7-8 percent drop in the previous two months. The CPI without food and energy, the standard by the Organization for Economic Cooperation and Development (OECD), rose 0.6 percent on year versus last month’s 0.5 percent. Core inflation, excluding volatile agricultural product and oil prices, improved slightly at 0.8 percent, recovering from a 20-year low of 0.6 percent in September.