According to Statistics Korea on Thursday, the seasonally adjusted mining and manufacturing output in September rose 2.0 percent against the previous month, extending flip-flop after a 1.8 percent fall in August. Compared to the same month last year, it added 0.4 percent.

Output of machineries including memory chip-making equipments rose 8.0 percent and automobile shipment was up 5.1 percent on month with the release of new car models. But telecommunications and broadcasting equipment output fell 16.4 percent.

Factory operation in September averaged at 75.6 percent, up 2.2 percentage points from the previous month. Inventory level gained 1.2 percent on month, the highest since January 2017.

Service sector output, an indicator for domestic demand, declined 1.2 percent against a month earlier. Health/social welfare added 0.9 percent but it was offset by retail/wholesale and finance/insurance sectors that fell 2.9 percent and 1.8 percent, respectively.

Retail sales, a barometer for private consumption, shriveled 2.2 percent on month, reversing from a brief pickup in August when consumer spending rose ahead of Chuseok holiday. The on-month fall was the largest since December 2017. Sales of non-durable goods like food fell 2.5 percent, semi-durable goods like clothes 3.6 percent, and durable goods like mobile phones 0.1 percent. 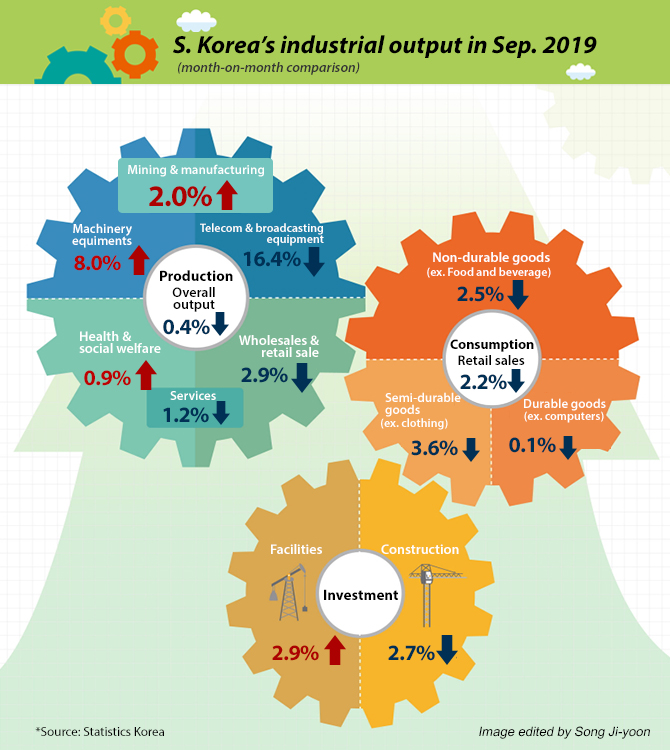 이미지 확대
The statistics office said the on-month fall in retail sales was primarily due to the high base effect from Chuseok holiday demand while service sector also suffered from unusual weather conditions of typhoon and heavy rain.

In the third quarter ended September, the country’s seasonally adjusted mining and manufacturing output was up 1.9 percent from the previous quarter but down 0.8 percent from the same period last year. Factory operation averaged 74.6 percent, rising 2.3 percentage points on quarter.

Service output grew 0.9 percent on quarter and 1.6 percent on year, with gains in the financial/insurance and health/social welfare segments.

Capital investment gained 1.9 percent on quarter but was down 3.2 percent on year.