이미지 확대
South Korea faces near 5 trillion won ($4.3 billion) fiscal deficit next year as tax revenue will be far shorter than expected due to reduced corporate income from protracted economic stagnation and higher welfare spending, according to data from the National Assembly Budget Office.

In proposing a supersized budget of 513.5 trillion won for next year, the government assumed tax revenue of 482 trillion won, which is a gap of 4.8 trillion won with the budgetary office estimate. 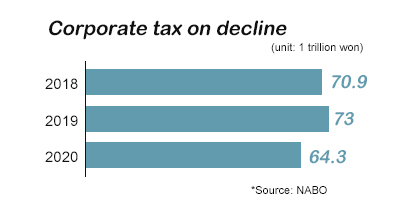 이미지 확대
Fiscal spending could further increase from the proposed record amount as the economy is unexpected to pick up next year after performing the worst in a decade this year. This year’s spending did not reflect the cost to subsidize farmers after the government announced to renounce the developing nation status of the World Trade Organization that strips of various tariff protect against farm produce imports.

The mismatch would require tax increases, but April general election could stop the government and ruling party from proposing a hike and cause a serious dent in the country’s fiscal integrity, said Bareun Mirae Party spokesperson Kim Su-min on Monday