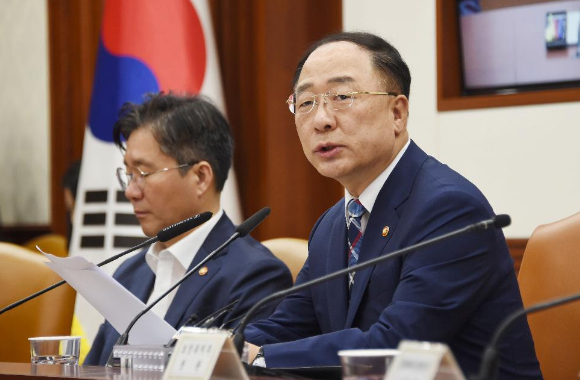 South Korea’s top economic policy chief argued on the need of structural reform amid sinking growth potential and economy, suggesting a possible shift in the focus on improving income and working conditions by the liberal government that has been under criticism for worsening labor rigidity and productivity.

Hong Nam-ki, deputy prime minister for economy in his Facebook page, introduced labor reforms in France that were pressed despite mass protests and ended in lowering the unemployment rate to lowest in a decade.

In order to “strengthen the economy and society’s adaptability” to the demographic changes, the government should set up a population policy task force to arrange policies to prevent a sharp decline in economically active population by extending employment of the elderly, enhancing women’s economic participation and utilizing foreign workers, Hong said.

이미지 확대
At the same time, the government should also work hard to implement a “forward-looking reform”, to increase total factor productivity (TFP) that measures economic efficiency by reflecting elements that affect productivity excluding labor and resources such as technology, system and resource allocation, he said. He argued that Korea should follow the example of France that pushed forward with a labor reform despite anti-government protest, which resulted in the lowest jobless rate at 8.5 percent since the global financial crisis in the second quarter and economic growth rate that surpassed that of Germany.

The policy chief’s remarks go contrast to pro-labor economic policies under the liberal government over the last two years and half.

The economy is expected to grow less than 2 percent this year, lowest in a decade. According to the preliminary figure released by the Bank of Korea last week, Korea’s gross domestic product (GDP) from July to September increased 0.4 percent from the second quarter, making it difficult for the country to achieve the central bank’s target of 2.2 percent for full 2019.

He also stressed the need to expand fiscal stimulation to boost the economic performance, but failed to elaborate on detailed plans again on how to strengthen the fiscal soundness.