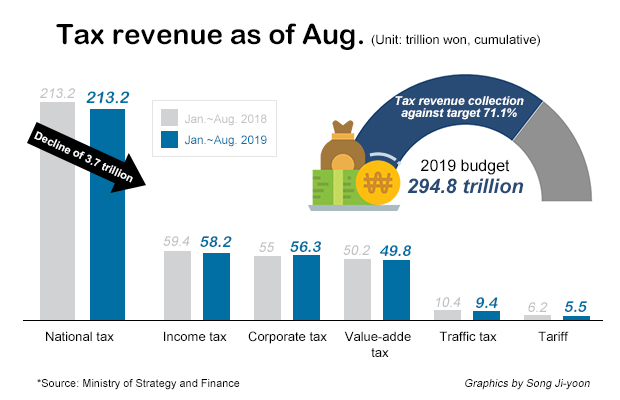 이미지 확대
The deficit in South Korea’s consolidated fiscal balance hit to an all-time high of 22.3 trillion won ($18.67 billion) by August this year amid slow tax revenue from economic downturn despite supersized budgeting for two years in a row.

The red in fiscal balance is the highest since consolidated data was compiled from 2000. Korea recorded January-August deficits in fiscal account only in 2009, 2014 and 2015.

The country’s fiscal deficit has stretched by a yawning pace from March amid fiscal expansion to fight unemployment and fuel Asia’s fourth largest economy. The management budget balance, which excludes the four major national funds such as pensions and employment insurance, posted a deficit of 49.5 trillion won.

Tax collection reached 71.1 percent of annual target as of August, 1.5 percentage point slower compared with a year ago.

By Sohn Il-seon and Minu Kim