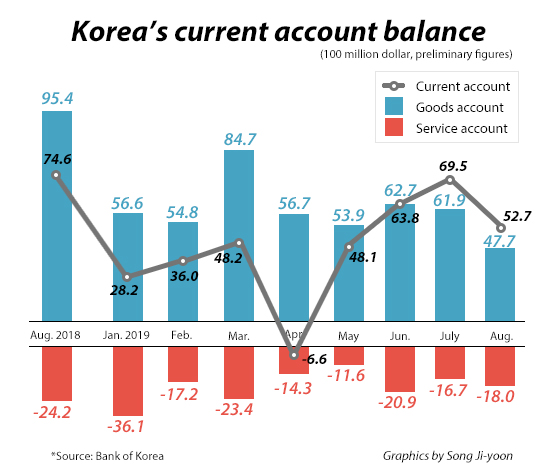 이미지 확대
The black in South Korea’s current-account balance shriveled to a four-month low in August as a protracted slump in exports delivered the smallest goods surplus in five years and seven months, data showed.

According to the Bank of Korea’s preliminary international balance of payments data Tuesday, Korea’s current-account surplus totaled $5.27 billion, reduced from $6.95 billion a month earlier and sharply from $8.55 billion a year ago.

Goods surplus stopped at $4.77 billion, dwindled from $6.19 billion a month earlier and the thinnest since $3.67 billion in January 2014 as the result of a 16 percent dip in exports in August due to weak prices in mainstay export items of memory chips and petroleum products. The fall in imports was smaller at 5.1 percent.

The red in services account amounted to $1.8 billion, widening from $1.67 billion a month earlier but reduced from $2.04 billion a year ago. The travel deficit narrowed to $1.07 billion from $1.55 billion a year ago as Koreans shunned visits to Japan amid diplomatic and trade row between Tokyo and Seoul. Koreans’ travelling demand to Japan in August plunged 48 percent on year to 309,000. Chinese visitors, however, increased 21 percent and Japanese 4.6 percent, helping to narrow the overall service account deficit on year.