Korean govt to employ all policy actions to prop up econ: fin min 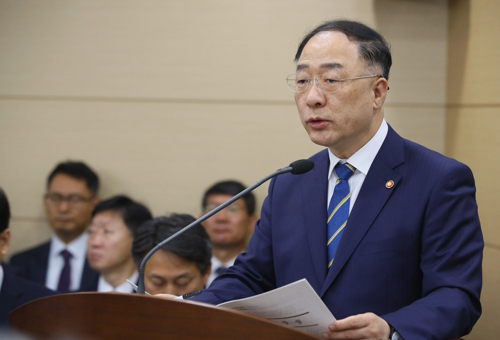 이미지 확대
The South Korean government will employ “all possible policy capabilities” to prop up corporate and consumer spending at home and drive exports to prevent a recession in the country that has been witnessing negative inflation for two months, deputy prime minister said.

“The government will make all-out efforts to revive the economy at a time when the business and economic uncertainties are rising due to headwinds like Japan’s export curbs,” said Hong Nam-ki, the finance minister and deputy prime minister, in a parliamentary questioning session on economic affairs on Wednesday.

His comments signaled a more aggressive spending by the government to boost the flagging economic activities. He said the government will invest 4.2 trillion won ($3.5 billion) in private projects and 55 trillion won in public institutions, and expand its support to expedite large-scale private finance projects to spur the economy. “The government is spending a record-high amount of budgets and injecting reserve funds to boost private consumption,” he said. “We will also carry out additional measures to fuel domestic demand such as cutting consumption tax for consumers replacing old cars and improving tourism infrastructure.”

A report released by the Bank of Korea on Wednesday found that the country has enough room to go aggressive in spending as the government’s fiscal policy tightened over the past three years compared to the previous year. Based on the standards of the International Monetary Fund (IMF), the nation’s fiscal stress index reached below zero from 2016 to 2018, meaning that the fiscal policies over the period were estimated to have been more contractionary from a year ago, according to the central bank.

By Yeon Gyu-wook and Choi Mira