S. Korea’s Sept exports in negative for 10th mo due to trade tensions 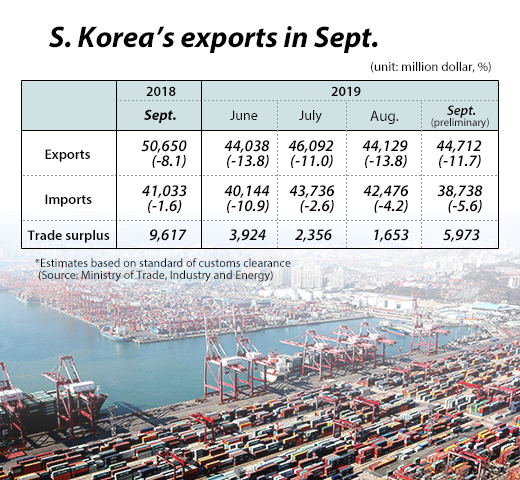 이미지 확대
South Korea’s exports in September stayed negative for the 10th month, with losses at double digits against a year-ago period as shipments to key markets of the United States, China, and Japan suffered from trade tensions.

According to data released by the Ministry of Trade, Industry and Energy on Tuesday, the country’s exports amounted to $44.71 billion in September, down 11.7 percent from the same month a year earlier. Exports have been falling on year consecutively since December with the contraction widening to double digits from June. It is the longest period for the exports to be on a downward spiral since the 19-month streak from January 2015.

The trade ministry pointed to a rise of 3.1 percent in shipment volume to suggest exports may be recovering. In volume, exports so far in the year added 0.9 percent.

Daily exports averaged $2.18 billion, the best for this year and topping the $2.0 billion-mark for the first time in three months.

By region, exports to China shriveled 21.8 percent and the U.S. 2.2 percent amid a prolonged trade war between the country’s two biggest trade partners Outbound shipments to Japan, with whom Korea has been waging its own trade row, fell 5.9 percent although eased from 6.2 percent drop in the previous month.

Exports to the Commonwealth of Independent States jumped 41.3 percent, to the European Union 10.6 percent, and Central/South Americas 10.8 percent.

The country delivered a trade surplus of $5.97 billion, the highest so far this year and 92nd month in the black.

The trade ministry noted the country’s average daily exports and trade surplus scored the best for this year in September, which raises hope that exports can regain vitality soon. As for the trade with Japan, the ministry said the impact from Tokyo’s export control on high-tech materials bound for Korea has been limited.