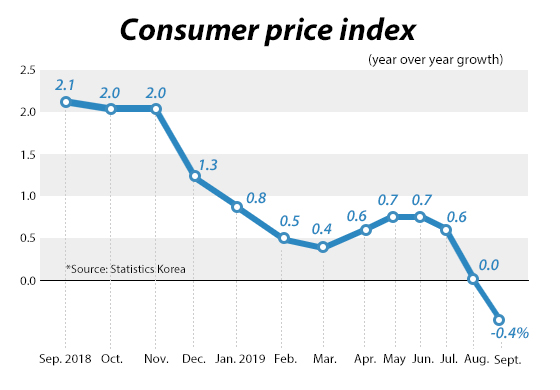 이미지 확대
South Korea’s inflation fell deeper into the negative in September after testing sub-zero territory for the first time in August, while authorities took pains to argue against a deflationary risk.

The country’s benchmark consumer price index (CPI) in September was 105.2, down 0.4 percent from a year ago, according to Statistics Korea Tuesday.

It is the country’s first negative inflation, claimed the authorities as they saw the August fall of 0.038 percent as more of a zero growth.

Inflation has stayed below 1 percent throughout the year, the longest stay in the zero territory since the 10-month streak in 2015.

The deflationary pressures are likely to strengthen the case for a rate cut at the upcoming rate-setting meeting on Oct. 17. But both government and central bank authorities claimed the fall was caused by the supply side and won’t last.

“Some are concerned about deflation, but ours is not a deflation where a broad fall in consumer prices continues for a lengthy period,” said Vice Finance Minister Kim Yong-beom, presiding over a meeting with financial authorities and central bank officials following the release of the CPI data. 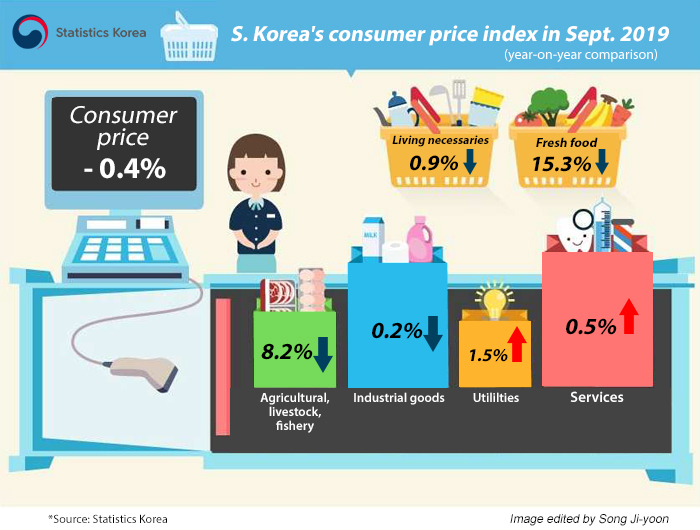 이미지 확대
The Bank of Korea issued a statement saying last year’s strong oil and fresh food prices would weigh on inflation until October and projected inflation to recover to above 1 percent from next year.

Statistics Korea also claimed the CPI gained 0.9 percent when excluding one-time, policy-induced factors, and projected the rate to recover its mid-to-high zero percent range once the base effect fades away from the year-end.

Still, the CPI without food and energy, the standard by the Organization for Economic Cooperation and Development (OECD), rose 0.5 percent on year, the lowest since 1999. Core inflation, excluding volatile agricultural product and oil prices, also hit a 20-year low of 0.6 percent.

By Choi Hee-seok and Kim Hyo-jin