BOK chief agrees econ to underperform 2.2%, but not to deflation theory 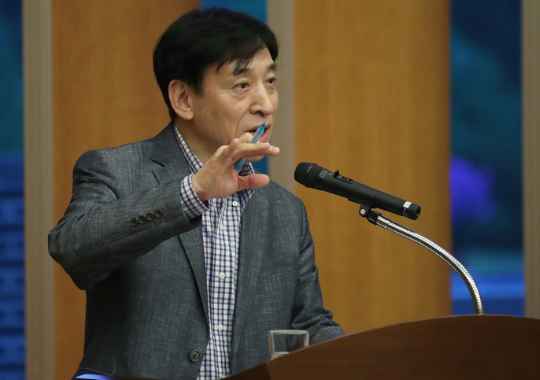 이미지 확대
South Korea’s central bank governor admitted the economy this year would likely underperform 2.2 percent growth estimated in July amid protracted fragility in domestic demand and external uncertainties, but did not judge it was under deflationary risk.

“It won’t be easy (for the economy) to meet the Bank of Korea’s outlook of 2.2 percent,” Lee Ju-yeol, governor of Bank of Korea (BOK), told reporters Friday, citing “increased downside risks” since July when the BOK revised down the country’s economic growth estimate for this year from 2.5 percent to 2.2 percent.

Lee pointed to the protracted slump in exports whose losses have extended to the 10th month and widened to 20 percent against a year-ago period in the first 20 months of September. Despite record fiscal spending, consumer sentiment remains lethargic, he noted.

He was not confident about any of the two major upsides to the Korean economic growth - recovery in semiconductor demand responsible for a quarter of Korean overseas revenue and eased tensions between the United States and China, the country’s two biggest exports markets – happening next year.

He did not betray further indication about a rate cut in the next monetary policy meeting due on Oct. 17.

“The bank is unchanged in keeping monetary policy in support of the economy after taking account of the increased uncertainties over the domestic growth and inflation and external factors,” Lee said. “We still have about three weeks until the next meeting. We will study all the developments during the period before making a decision.”

The market bets on a quarter percentage point cut in the interest rate to a historic low of 1.25 percent in upcoming or November meeting, while many experts at home and abroad have been advising the central bank to go more aggressive with the option of pushing the rate into the zero territory.

He projected the country’s inflation will stay negative for the next two months after going sub-zero for the first time in August, but disagreed with deflation theory as he expected prices to pick up to around 1 percent by year-end.

The three-year government yield Monday fell to 1.297 percent from previous closing of 1.301 percent.