이미지 확대
South Korea’s factory output turned negative in August after a short-lived rebound while consumption picked up at the fastest pace in more than eight years, sending mixed signs about the economy that has been performing at its worst in a decade.

The seasonally adjusted mining and manufacturing output in August slid 1.4 percent from the previous month, reversing from a 2.8 percent gain in July, according to Statistics Korea on Monday. Against a year-ago period, production was down 2.9 percent.

Output of telecommunications and broadcasting equipment jumped 53.2 percent on strong demand for Korean 5G and latest innovative phone releases. But the gains were offset by a 4.6 percent cut in car production due to discontinuation of several models and troubles of carmakers under foreign ownership. Rubber and plastic output dropped 5.9 percent from reduced production of car tires and transportation equipment. 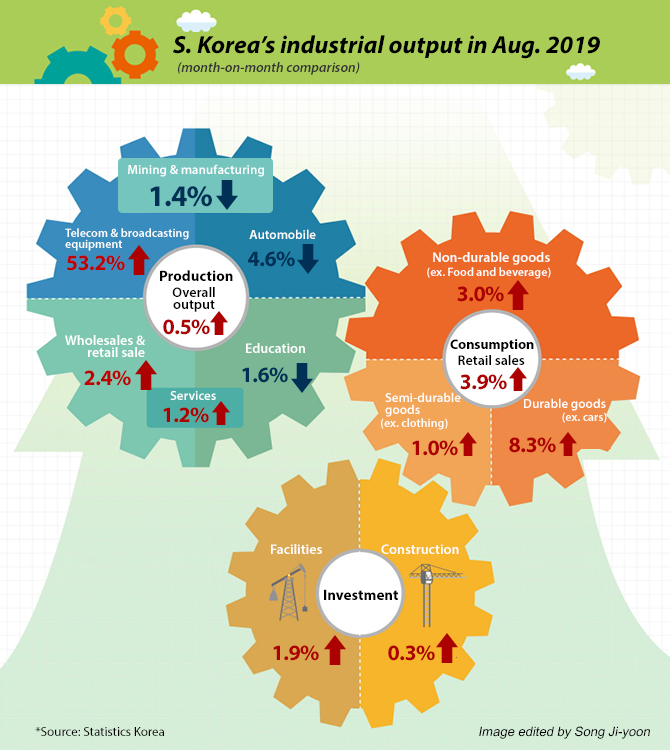 Service sector output expanded for the second straight month to add 1.2 percent in August against the previous month. Education fell 1.6 percent while wholesale and retail sectors were up 2.4 percent and finance and insurance 1.5 percent.

Capital investment rose 1.9 percent, extending the 2.1 percent gain in July. Investment in industrial machinery, including chipmaking equipment, was up 1.7 percent and aircraft and other transport equipment 2.1 percent.

The coincident index, which measures the current state of economic activity, gained 0.2 points to 99.5. The leading indicator, which forecasts future economic activities to suggest where the business cycle is heading, slipped further, down 0.1 points at 98.3.