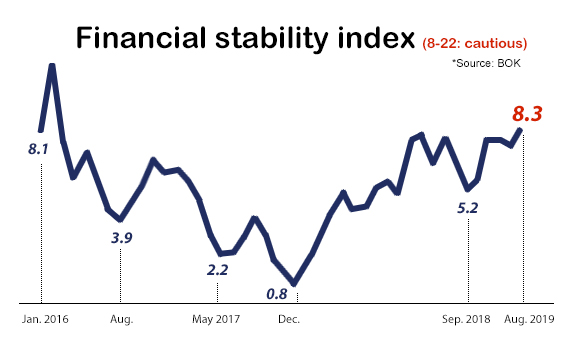 이미지 확대
The Korean central bank raised alert about escalated risks to the financial system due to growing delinquency ratio in household and corporate loans amid a protracted economic slump.

According to a report released by the Bank of Korea (BOK), the financial stability index (FSI) in August reached 8.3, surpassing 8 for the first time since 11.0 reading in February 2016 when the market had been hit hard by the crash of the Chinese stock market and plunging international crude prices.

The index is rated on a scale of 0 to 100, and the closer the point is to 100, the greater the country’s financial instability. The central bank deems the market stable when rated 0 to 8 and shifts to “watchful” guard when the reading goes beyond 8. A number beyond 22 means the market in “crisis.”

“The FSI has surpassed 8 due to the weakening confidence of the economic players and rising uncertainties in the asset markets caused by the protracted trade dispute between the U.S. and China and Japan’s trade restrictions,” the BOK said in the report.

The market entered “watchful” phase eight times in the past, three of which had led up to major turmoil- the 1997-1998 liquidity crisis that sent the country seek an international bailout, the dot-com bubble burst in 2000-2001 and global financial crisis in 2008-2009.

Those times, it had taken six to eight months before the markets shook from external turbulence.

Although keeping up vigilance, the bank, however, downplayed any need to be fearful of a looming crisis as the financial sector remains stable.