According to OECD on Wednesday, Korea`s CLI, which is used to anticipate turning points in economic activity six to nine months ahead, stood at 98.79 in July, down 0.08 point from a month ago and lowest in since 98.78 in April 2012. The leading indicator has been hovering below 100 since July last year.

A reading above 100 implies the economy is likely to expand six to nine months ahead while vice versa for below 100.

Ever since Korea`s CLI hit its peak at 101.7 in May 2017, the leading indicator has been on a downward spiral for a 26th month in July, the longest period since OECD began compiling related data in January 1990. The previous record was the decline for 20 straight months from May 1995 to December 1996, as well as from September 1999 to April 2001, respectively. 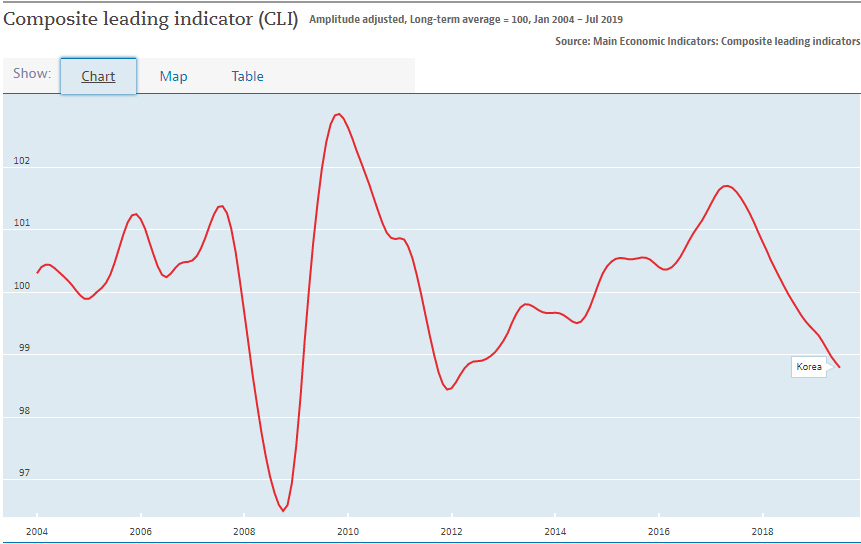 Economic indicators released by the Korean government also suggested that prospects for the economy remained unfavorable.

According to Statistics Korea, the country`s leading indicator retreated 0.3 point on month to 97.6 in July. The index has remained below 100 for 11 consecutive months since August 2018 and continued its southbound move since June last year, except April when it inched up 0.1 point.

A reading above 100 for both economic leading and coincident indicators suggest a growth trend while vice versa for below 100. The readings help signal growth and contraction of the economy.

By Moon Jae-yong and Lee Eun-joo