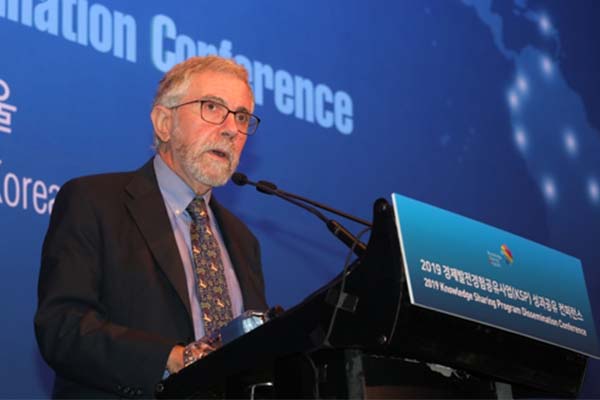 The South Korean government should introduce fiscal stimulus measures that would immediately resuscitate the economy, according to Nobel Prize-winning economist Paul Krugman.

In a meeting with Korean Deputy Prime Minister and Finance Minister Hong Nam-ki on Monday, Krugman, also an economics professor at the City University of New York’s Graduate Center, said Korea has enough fiscal ammunition to stimulate the economy in the short term, stressing that it is time for the government to “act boldly” as its economic prospect is becoming murkier at a brisk pace.

He said social overhead capital (SOC) projects are not ideal options to revive the economy because such SOC projects take time.

Krugman was in Seoul to give a keynote speech at a 2019 conference on sharing results of Korea’s Knowledge Sharing Program (KSP) projects with less developed countries. His meeting with Hong was held on the sidelines of the event.

The Korean government has proposed a record 513.5 trillion won ($422 billion) budget for fiscal 2020 to offset the downside economic risks. The government maintained its ultra-expansionary fiscal stance, raising the budget by another 9.3 percent from 2019 after the 9.7 percent hike in the previous alone. SOC projects alone would be increased by 12.9 percent.

Krugman’s remarks come as Korea’s consumer price growth hit a record low in August since Statistics Korea began compiling related data in 1965, raising concerns over possible deflation, which would further weigh on the Korean economy facing multiple challenges amid intensifying trade disputes between the U.S. and China and its own with Japan. 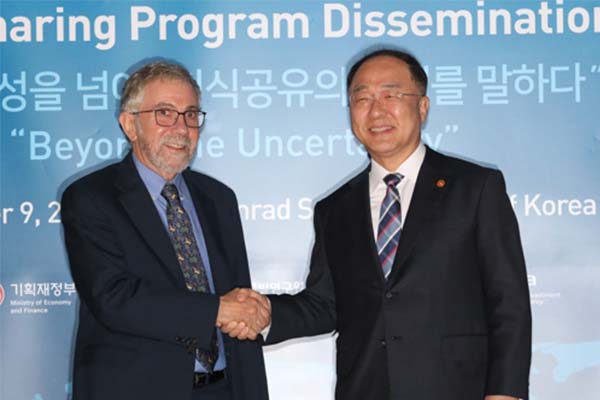 In a separate press conference after giving a keynote speech at the conference in Conrad Seoul hotel, Krugman again urged the Korean government to “act boldly to prevent [deflation] from happening before it becomes embedded into the economy.”

Krugman and Hong also shared views on concerns over the global economy.

“Next year’s [gloomy] global economic outlook and Japan’s export curbs have added uncertainties to the Korean economy,” Hong said. “There are growing concerns that the overall value chain of the global economy would aggravate.”

Krugman responded by saying that he does not believe that the global economy would fall into recession next year but there would be a slowdown if the Sino-U.S. trade disputes continue without agreements.

Krugman added that the escalating trade tension between Korea and Japan not only increases uncertainties on the economies of the two countries but also the global economy.

With regards to Moon Jae-in government’s income-led growth policy through drastic hikes in minimum wages, Krugman said a minimum wage hike can spur consumption and have some positive impact on the economy but its impact is generally insignificant. Instead he suggested that it would be more effective for the government to stimulate the economy through expansionary fiscal measures especially when the global economy faces dim outlook.