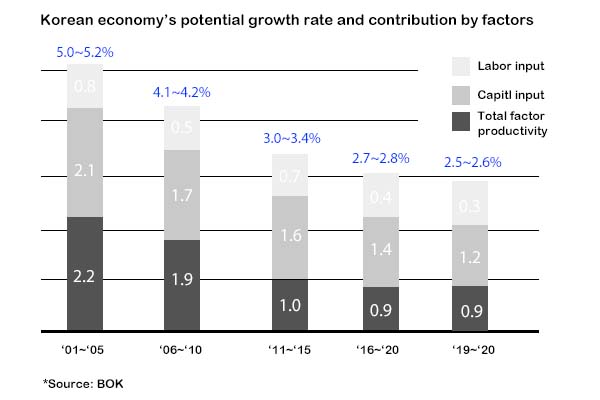 이미지 확대
South Korea’s economic growth potential has sharply weakened to around 2.5 percent from around 3 percent and the economy has been performing “far below” the rate this year, according to the Bank of Korea (BOK).

“South Korea’s economic potential has been structurally weakening, and the economy recently has been performing far below the potential rate,” the central bank said on Monday.

The central bank in July revised down the maximum potential for the economy’s growth to 2.5 percent to 2.6 percent for 2019 and 2020, sharply lower the long-held “around 3 percent.”

The growth potential refers to a growth rate that an economy is expected to achieve by making the most of its labor and capitals while limiting inflation.

“The potential growth rate would continue to fall due to rapid reduction in working age population amid low birth rate and aging population, maturation of main industries and shrinking investments hampered by rising uncertainties,” the central bank added in the report.

In fact, the gap between the real and potential economic growth rate has widened. The BOK’s economic growth outlook for this year at 2.2 percent falls below the potential growth rate of 2.5 to 2.6 percent, deepening market bets on another cut in the benchmark rate following the surprise cut in July in more than three years from 1.75 percent to 1.50 percent. A majority of bond experts believe the central bank would lower its key rate again in the next meeting.​