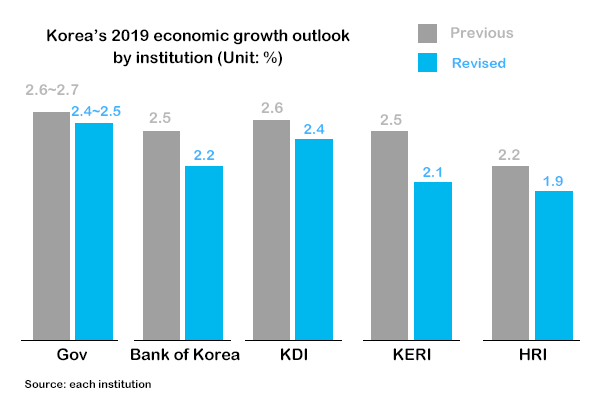 The Korea Economic Research Institute (KERI) under the Federation of Korean Industries, a body of large business groups, put this year’s gross domestic product (GDP) growth rate at 1.9 percent, down from the previous 2.2 percent.

Their forecasts fall below the government estimate of 2.4-2.5 percent and the Bank of Korea’s 2.2 percent.

The central bank last month revised down Korea’s economic growth rate for the April-June period to 1.0 percent from 1.1 percent, following a 0.4 percent contraction in the first quarter.

The gloomier performance and outlook reflects worsening exports that stamped out feeble recovery in domestic demand.

“Household and business sentiment has deteriorated in the third quarter from the previous three months from sluggish demand at home and mounting global uncertainties,” said HRI. It added that consumer sentiment has slumped for the fourth straight month, reflecting the deepening pessimism despite the massive fiscal stimulus program.

이미지 확대
Exports continue to tumble as the ongoing trade war between the United States and China and Korea’s own trade battle with Japan weigh on the trade-dependent economy. Korea’s exports totaled $44.2 billion in August, down 13.6 percent from a year ago. The losing streak extending for the ninth month has widened to double digits in recent months.

There are little signs of upside on the global front. According to a Bank of Korea report, global trade in June slipped 1.4 percent from the previous month to post its second straight month of decline. This is the first time global trade has slumped for two months in a row since the height of the global financial crisis from the third quarter of 2008 to the first quarter of 2009.

Worse, Korea now confronts an unprecedented deflationary pressure. Korea’s consumer price slipped 0.04 percent in August, the first taste of subzero territory after hovering in the zero range throughout the year

HRI in its report said that falling global prices of raw materials and the stubbornly weak demand are heightening risks of deflation and called for more aggressive stimulus actions.