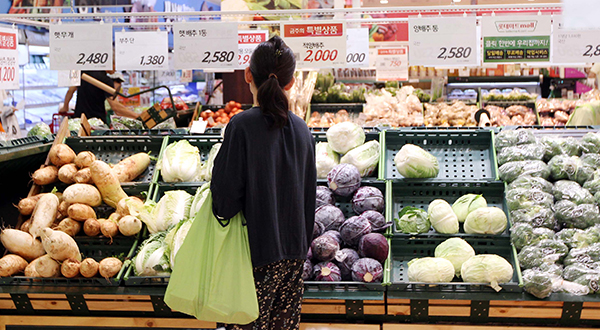 이미지 확대
South Korea’s consumer prices are poised to grow at a historically slow pace this year in an absence of catalysts that could immediately spark inflation, raising expectations for additional rate cuts by the Bank of Korea this year to revitalize the country’s economy.

According to Statistics Korea on Sunday, Korea’s consumer prices edged up 0.5 percent during the January-August period – the lowest figure for the period since the agency began compiling related data in 1965. The lowest consumer price growth during January-August was 0.6 percent in 1999 and 2015.

The record low inflation rate comes after Korea in August experienced sub-zero inflation with a dip of 0.04 percent for the first time in 54 years after remaining in the zero territory for eight straight months, the longest period since February-November 2015.

But a recovery is not imminent. The Ministry of Economy and Finance and Statistics Korea warned that Korea’s consumer price growth would remain below last year’s level for the following two or three months from September before recovering to the higher zero territory in the year end.

The Bank of Korea also hinted at the possibility of the country’s on-year inflation rate falling into a negative terrain once or twice between August and October, citing the relatively higher inflation rates in the same period of last year on top of softening prices of food and international oil prices this year. 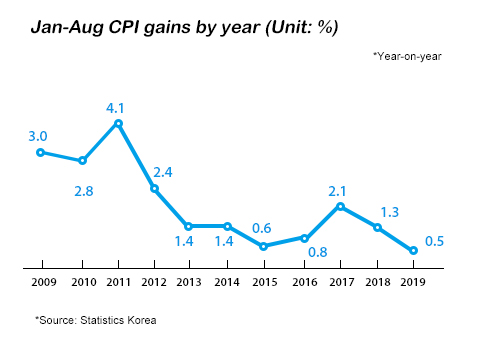 이미지 확대
The record low inflation rate in January-August suggests that Korea’s consumer price growth hits a record low annual level below 0.5 percent this year, which is much lower than the Korean government’s initial estimate of 0.9 percent.

Korea’s annual consumer price growth rate fell in the zero territory two times so far – in 1999 during the Asian financial crisis (0.8 percent) and 2015 upon the outbreak of the Middle East Respiratory Syndrome (0.7 percent).

Reflecting the latest inflation trend in Korea, major institutions have revised down the country’s inflation rate for this year. According to Korea Center for International Finance, nine global investment banks projected Korea’s consumer prices to grow 0.7 percent this year as of the end of August. Citi, JP Morgan, and Barclays even suggested an outlook of 0.5 percent.

The record-low inflation and fragile growth are expected to prompt the Bank of Korea to cut rates in the next two policy meeting on Oct. 17 or Nov. 29. The central bank chose to stand pat in the latest meeting in August, waiting out its rate action move until the U.S. Federal Reserve meeting later this month. But BOK Governor Lee Ju-yeol hinted at possible a rate cut to a historic low of 1.25 percent if economic conditions call for dramatic action and warned of a brief deflation in the coming months.