Number of beneficiaries of state unemployment allowances on surge in Korea 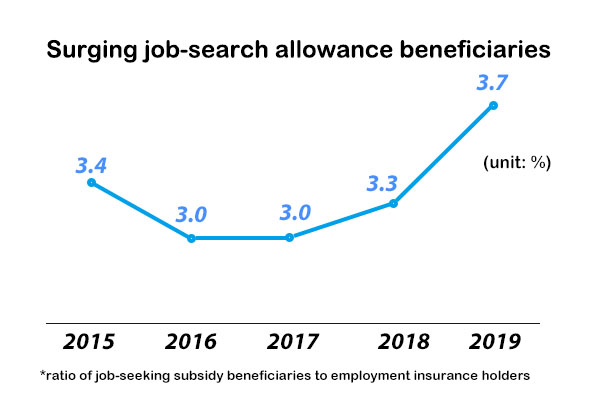 이미지 확대
Applicants for government cash compensations for dismissals from workplaces jumped despite improvements in job data in Korea, suggesting the job market remains gloomy regardless of recent additions from tax-funded jobs.

According to the employment insurance statistics released on Thursday, 3.67 out of 100 people under state employment coverage picked up their dues after losing jobs in the first half, up from 3.25 last year.

Job-seeking allowance is a type of unemployment benefit provided by the government for people who lose employment insurance benefits due to dismissal.

The situation is very much the same when considering the seasonal factor that the job-seeking subsidy payments tend to increase during the January to June period. The number of job seekers subsidized by the state benefits reached around 33 out of 1,000 employment insurance holders in the first half of 2013 to 2015, 32.4 in 2016 and 31.7 in 2017, but the rise began to pick up speed to reach 34 in the same period last year and 36.7 this year.

Some industry experts attributed the gain to the country`s steep minimum wage hikes over the past two years. Wage hikes are supposed to be good news to employees, but drastic gains during an economic slowdown could a backlash to job seeks because employers reeling from the downturn tend to focus more on cost cutting than expanding investment on either facilities or manpower.

The Korean economy grew 1.0 percent on quarter in the second quarter on the back of a 0.4 percent fall in the previous quarter. Inflation fell subzero last month, the country’s first encounter of deflationary number.

The increase in the government subsidy was also driven by rising business closedowns amid unfavorable economic conditions. The number of newly established businesses from January to July reached 847,534, while 922,537 businesses shut down over the same period. It marked the first year that had more business shutdowns than openings by above 8 percent since 2010.