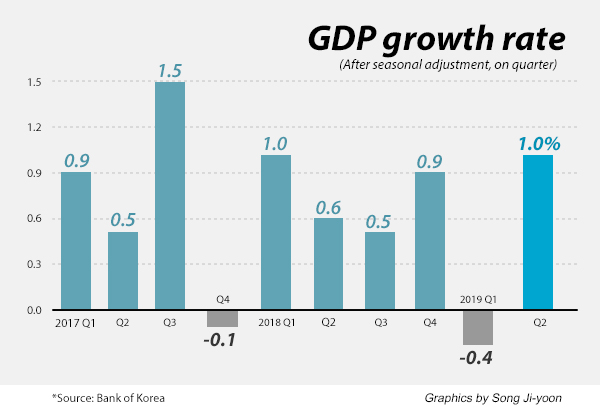 이미지 확대
South Korea’s economy in the second quarter added 1.0 percent from the previous quarter, revised down from preliminary 1.1 percent upon reflecting small contribution from government spending and exports.

The country’s seasonally-adjusted real gross domestic product totaled 459.8 trillion won ($378.5 billion) in the April-June period, gaining 1.0 percent on quarter instead of 1.1 percent estimated in July, according to the Bank of Korea’s finalized data on Tuesday.

Against a year-ago period, GDP grew 2.0 percent, adjusted down from 2.1 percent in July.

The latest data went unnoticed in the markets. The main Kospi bourse finished 0.18 percent lower at 1,965.69 on Monday. The Korean currency ended at 1,215.6 won against the U.S. dollar, down 4.8 won from the previous session.

The central bank explained the figures were weaker than previously estimated after full reflection of economic activities in June.

Private spending was up 0.7 percent on quarter, unchanged from the July preliminary data. Government spending addition was revised to 2.2 percent from 2.5 percent. 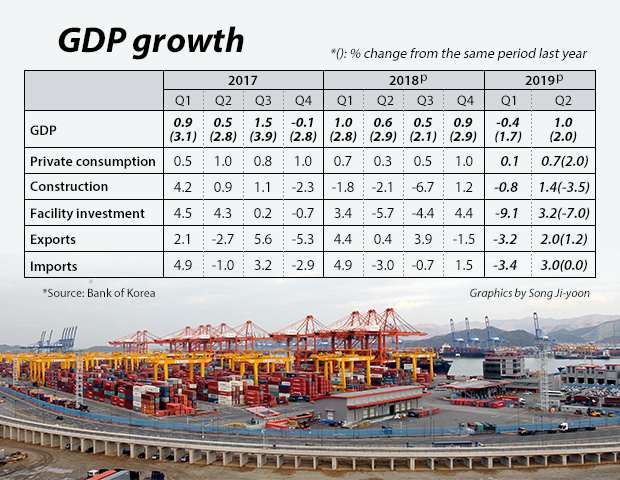 Real gross national income (GNI) in the second quarter after seasonal adjustment came at 453.3 trillion won, up 0.2 percent on quarter and 0.3 percent on year. The GNI is the total value of income earned by residents of a country in a year.

GDP deflator, a measure of the price level of all domestically produced goods and services in an economy, fell 0.7 percent from the previous quarter, the worst since the first quarter of 2006. The figure has been on a downward track since the fourth quarter of last year in line with subdued domestic demand. A negative GDP deflator means fall in productivity in an economy.