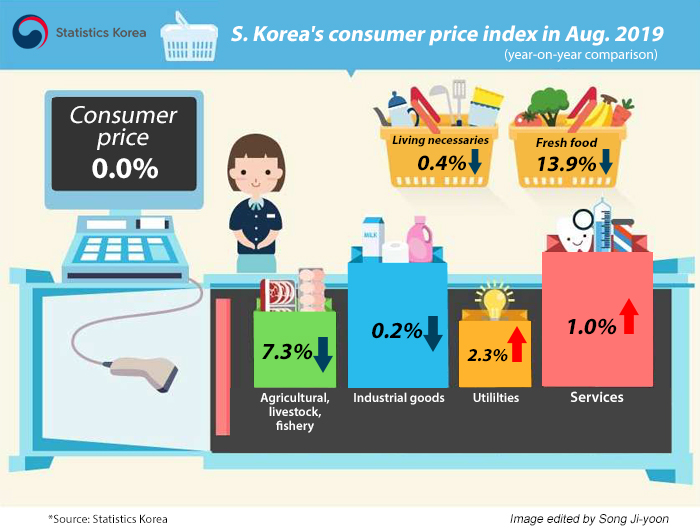 이미지 확대
In an alarming symptom of an economy headed for recession, South Korea’s inflation touched an unprecedented level of zero growth amid softening in volatile food and gas prices coupled with protracted stagnation in consumer demand.

The country’s benchmark consumer price index (CPI) in August was 104.81, down 0.038 percent from a year ago, according to Statistics Korea. It is the first time the country has experienced sub-zero inflation since data was available from 1965.

Inflation has stayed in zero territory since January, the longest period since February-November 2015.

Separately, the Bank of Korea (BOK) revised down the gross domestic product growth for the second quarter to 1.0 percent from the preliminary gain of 1.1 percent in July.

The record-low inflation and fragile growth are likely to bolster the case for a rate cut in the next two policy meetings on Oct. 17 or Nov. 29. The central bank chose to stand pat last week, waiting out its rate action move until the U.S. Federal Reserve meeting later this month.

BOK Governor Lee Ju-yeol had flagged the possibility of pushing the benchmark rate to a historic low of 1.25 percent if economic conditions call for dramatic action and warned of a brief deflation in the coming months.

Prices of agricultural products dropped 11.4 percent in July from a year ago, dragging down the headline inflation by 0.53 percentage point.

The CPI without food and energy, the standard by the Organization for Economic Cooperation and Development (OECD), rose 0.8 percent on year. Core inflation, excluding volatile agricultural product and oil prices, also gained 0.9 percent from the previous year.

Statistics Korea projected inflation to remain in negative territory for the next two to three months against last year’s high fresh food and oil prices. But it expected the rate to rebound to the mid-to-high zero percent range once the base effect wears off by the year end.