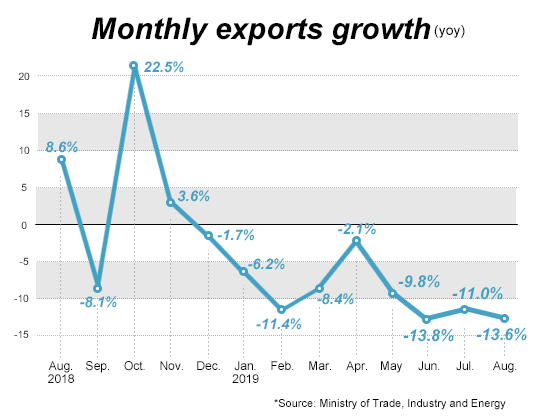 이미지 확대
A downturn in South Korea’s exports accelerated in August after tumbling 13.6 percent on year, extending a losing streak to nine consecutive months due to a persistent global chip price slump amid lingering uncertainties from ongoing trade disputes between the U.S. and China, as well as Korea’s own with Japan.

According to data released by the Ministry of Trade, Industry and Energy on Sunday, Korea’s exports amounted to $44.2 billion in August, down 13.6 percent from the same month a year ago. The falling pace re-accelerated after easing to the 11.0 percent drop in July from the contraction of 13.8 percent in June, the worst since January 2016. It was also the ninth consecutive fall since December when exports dipped 1.7 percent on year.

The downward spiral in exports was mainly driven by the protracted slump in the prices of Korea’s mainstay items semiconductors and petrochemical products amid sluggish demand from the ongoing trade disputes between the world’s two biggest economies the U.S. and China. Exports of semiconductors fell 30.7 percent, petrochemicals 19.2 percent, and petroleum products 14.1 percent.

Export volume, meanwhile, increased for two months in a row in August, thanks to a 0.1 percent expansion in shipment volume of semiconductors and petrochemical products. Korea’s cumulative export volume for January-August period also increased 0.7 percent.

By region, exports to China plunged 21.3 percent, the United States 6.7 percent, and Japan 6.2 percent. Shipments to the Association of South East Asian Nations, however, increased 1.9 percent and Commonwealth of Independent States 8.8 percent. 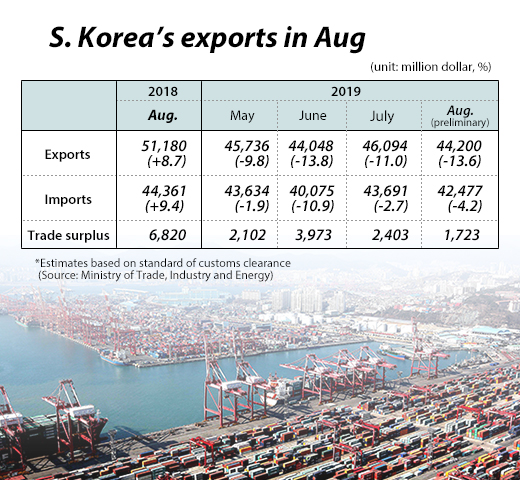 The trade ministry said that overall impact from Japan’s export curbs that began in July was limited as imports of three high-tech materials essential for the production of chips and displays on which Japan tightened its export control totaled $80 million in July, accounting for a mere 1.8 percent in the country’s total $4.16 billion imports from Japan. The Japanese government has also approved exports of photo-resist and hydrogen fluoride on three occasions in August.

The ministry noted that despite growing uncertainties from the external front amid the intensifying trade war between the U.S. and China and Korea’s own trade spat with Japan, Korea’s exports in August stayed above this year’s lowest in June, and export volume extended gains for a second straight month thanks to a rise in shipments of other mainstay automobiles and ships, suggesting the fall in exports may slow down.