Korea’s July output best in 32 mo, although spending poor on doubts on economy

이미지 확대
South Korea’s factory output in July was the most robust in 32 months thanks to revived activity in automobile and chemical shipments, although spending stayed subdued on growing uncertainties for household and national income.

According to Statistics Korea on Friday, the seasonally adjusted mining and manufacturing output in July rose 2.6 percent from the previous month, the biggest monthly gain since November 2016. Against a year earlier, production was up 0.6 percent.

The improvement in industrial output was mainly led by automobile sector whose output rose 6.3 percent from a month earlier on warm response to new releases. Chemicals shipment also gained 7.3 percent on month with completion of regular maintenance works as well as improvements in both domestic and overseas demand. Electronics components output, however, fell 2.8 percent on month, with memory chip shipment contracting 4.1 percent on month while inventory grew 10.9 percent.

Factory operation in July averaged 74.8 percent, up 2.6 percentage points from the previous month. Inventory level rose 1.3 percent on month and 8.0 percent on year. 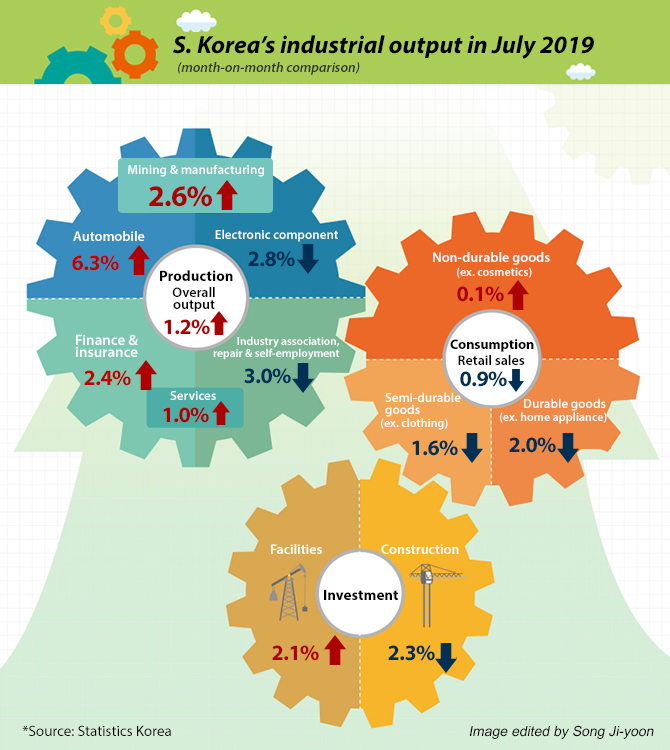 이미지 확대
Capital investment increased 2.1 percent from a month earlier, accelerated from a 0.4 gain in June. Investment in machineries for making cars jumped 11.3 percent on month but that for memory chips contracted 1.0 percent.

Retail sales, a barometer for private consumption, however, retreated 0.9 percent from a month earlier to extend a losing streak to the second consecutive month. Sales of non-durable goods such as cosmetics rose 0.1 percent from a month earlier but those of durable goods like home appliance and semi-durable goods including clothes contracted 2.0 percent and 1.6 percent, respectively, on slower demand for hot weather-related items due to cooler-than-expected summer.

Despite the gains in industrial data, prospects for the economy remained unfavorable.

By Kim Tae-joon and Cho Jeehyun