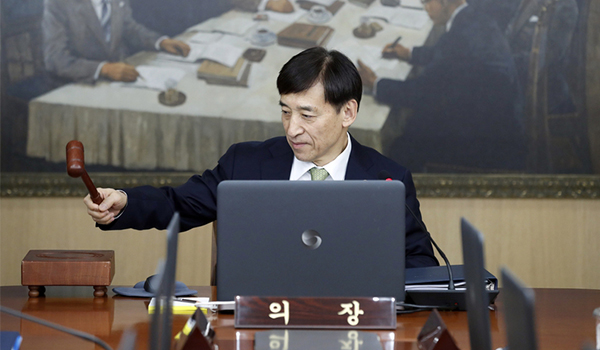 이미지 확대
The South Korean central bank delivered its first rate cut in more than three years on Thursday as it warned Asia’s fourth-largest economy was headed towards its lowest growth in a decade this year due to multiple whammies.

The Bank of Korea (BOK) on Thursday shaved the policy rate by 25 basis points to 1.50 percent, a level last touched in June 2015 before it came down by a quarter basis points to a historic low in the following year.

“The growth and inflation trend has been weaker than expected,” said BOK Governor Lee Ju-yeol after the policy meeting where only one disagreed with the cut that leaves the seven-day repurchase rate just a tad over the all-time low of 1.25 percent.

Unlike market expectations, the bank did not wait for an anticipated easing from the U.S. Federal Reserve as consumer and business sentiment significantly soured after a diplomatic spat between Seoul and Tokyo spilled over to the economic front.

“Given the weight of IT components and exports to the economy, the impact from the Japanese restrictions cannot be small,” he said.

The extra burden led the bank to sharply lower this year’s gross domestic product growth estimate to 2.2 percent from 2.5 percent projection in April. A growth of 2.2 percent would the lowest since the recession-hit year of 2009 when the economy added 0.7 percent in annualized rate following the 2008 global financial crisis. 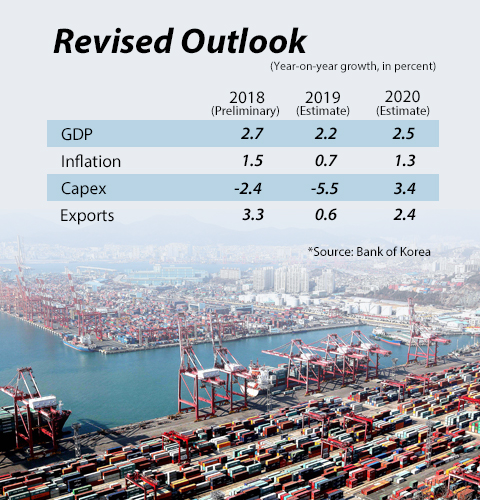 The three-year government bond yield touched fresh annual low of 1.345 percent while the 10-year paper fell under the policy rate of 1.50 percent, yielding 1.472 percent. The last time they were so low was in the wake of June 2016 cut to the record low of 1.25 percent.

The BOK chief did not opt out the possibility of another easing move, saying “The policy room has narrowed after today’s cut. But we still have ammunitions to respond to economic developments.” 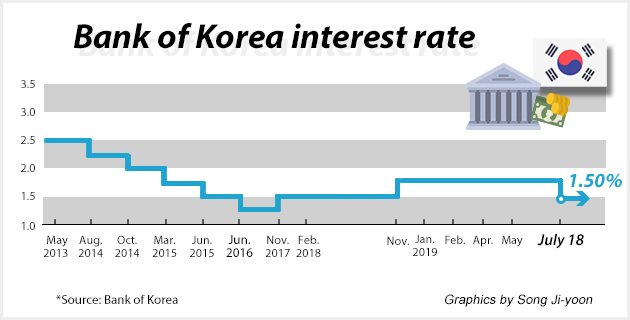 이미지 확대
The cuts in rate and GDP outlook came ahead of the release of the second-quarter GDP data on Thursday next week. The economy contracted 0.4 percent on quarter and gained 1.7 percent on year in the first quarter. Given the downgrade, the economy may not have done any better in the second quarter.

The headline inflation has hovered in the zero territory for six straight months this year, the longest-ever period since 2015. The bank revised down this year’s consumer price gain estimate to 0.7 percent from 1.1 percent.

Exports have extended losing streak for eight months with the losses widening to double digits in recent months. Dealing a heavier blow to the component sector responsible for a quarter of Korean exports on top of cyclical downturn, Japan has slammed restriction on shipments of key materials that go into chip and display production by removing Korea from fast-track on the items from July 4.