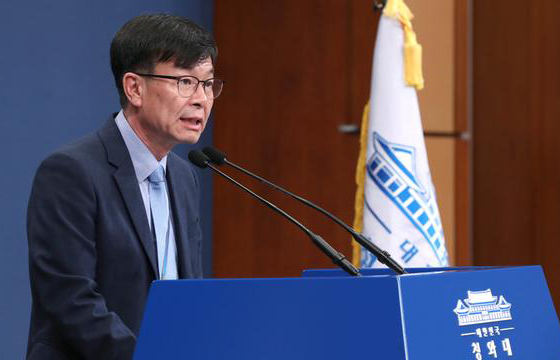 South Korean President Moon Jae-in reiterated his plea for union understanding of stalling his campaign pledge of achieving hourly statutory minimum wage of 10,000 won ($8.48) within the first three years of his term, with trade unions pledging general strike and nationwide protests against the government for betraying their labor support base.

Kim Sang-jo, the president’s policy chief quoted Moon as saying that “I feel deeply sorry as the president for not being able to keep my promise with people to increase the minimum wage to 10,000 won within the three years,” at a press briefing held at the presidential office Cheong Wa Dae on Sunday.

The Minimum Wage Commission, a tripartite committee of government, business and labor representatives, decided on Friday to raise the hourly base wage by 2.87 percent from the current 8,350 won to 8,590 won for 2020. It was much slower from the 16.4 percent jump in 2018 and the 10.9 percent hike this year. Kim cited at the briefing that Moon said the commission made the decision after taking into account the nation’s “economic situations, employment conditions and market receptivity.”

Kim also emphasized that he hoped the decision would not stand in the way of the process of building trust between laborers and the government, adding that the government is not giving up on the income-led growth policy.

Moon’s apology came amid a strong backlash by laborers, especially from the Korean Confederation of Trade Unions (KCTU) who called the commission’s decision a “minimum wage disaster” and vowed to launch a general strike.

The militant umbrella union is the core support base for the liberal government as it spearheaded the civilian protest to oust former president Park Geun-hye for corruption and power abuse charges. The union decisively turned its back on the government after its leader Kim Myeong-hwan was arrested last month for leading violent demonstrations.

The Moon administration has been seeking to drive the country’s economic growth by improving the incomes of average Koreans under the so-called income-led growth initiative. But the government has hit a snag in sustaining the policy amid sharp deterioration in the economy.

The gross domestic product fell 0.4 percent on quarter in the first quarter. The government slashed this year’s economic growth outlook to 2.4-2.5 percent from 2.7 percent, the weakest growth in seven years.

By Oh Soo-hyun and Choi Mira