According to Bank of Korea data released Friday, the country’s export price index in June fell 2.1 percent to 100.95 from a month earlier, the first on-month retreat since January. Against June of last year, the index was down 2.5 percent.

The central bank attributed the fall in export prices mainly to the softening in the U.S. dollar. The dollar averaged 1,175.62 won in June versus 1,183.29 won in May.

Export prices of coal and petroleum products plunged 8.3 percent from a month earlier. Those of computer, electrical and optical instruments fell 2.0 percent. 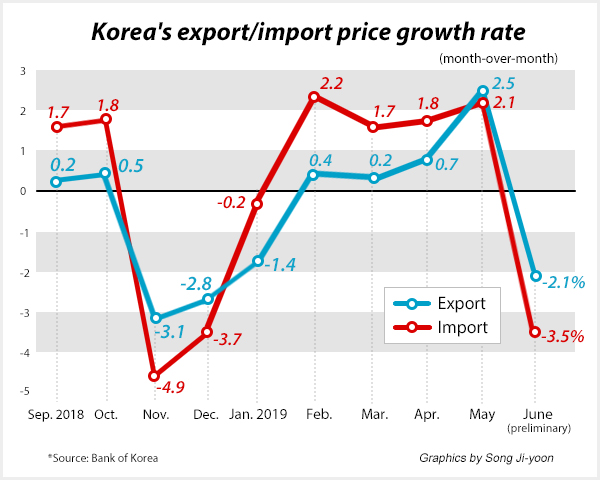 이미지 확대
The country’s import price index fell at a faster rate of 3.5 percent on month to 109.58, also its first month-on-month decline since January. Against a year ago, it was down 0.4 percent.

The fall in import prices was largely due to the softening global oil prices, as the country relies entirely on oil imports. The prices of Dubai crude, which makes up the bulk in Korean oil imports, averaged $61.78 per barrel in June, down 11.0 percent from the previous month.

Import prices of raw materials, which include mineral products and crude oil, fell 6.9 percent on month. Prices of intermediary goods such as naphtha were down 2.5 percent. Prices of goods and consumer goods slipped 0.4 percent and 0.7 percent, respectively.

When counting out the FX factor, the export and import prices in June fell 1.5 percent and 3.0 percent from the previous month, respectively, the bank said.