이미지 확대
The growth in household loans significantly eased in the first half from a year ago under stricter loan regulation and sluggish housing market.

Household loans extended by the banking sector added 5.4 trillion won in June, 400 billion won more than the increases a year ago and a month ago. The addition was biggest since the same gain in December.

Mortgage-backed loans increased 3.9 trillion won in June, 700 billion won greater than the gain in the same period a year earlier and 1 trillion won more than a month ago. The increase came on the jump in collective loans as families moved into new apartments in the capital area. 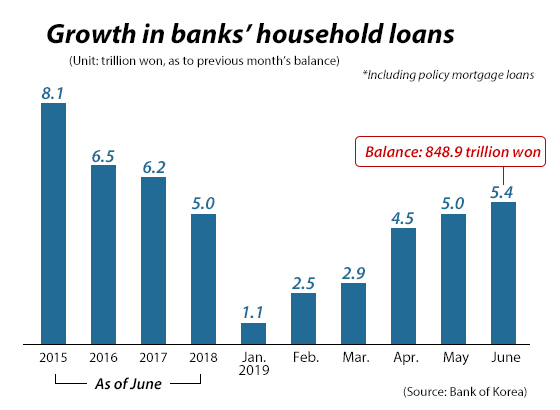 이미지 확대
The BOK said that growth in mortgage-backed loans extended in June comes as demand grew for loans to pay out balances to move into new apartments as well as steady rise in demand for loans for jeonse, or long-term rents.

The FSC also explained that 700 billion won worth government subsidy for housing deposits offered by Korea Housing & Urban Guarantee Corporation has started to be counted as household loans extended by banks from this year. When excluding the amount, the growth in household loans in June would remain similar to last year, it said.

Other loans extended by the banking sector, meanwhile, increased 1.5 trillion won in June, 300 billion won slower from a year ago and 600 billion won from a month ago.

Under DSR, financial institutions reflect an index that divides principal payments of credit-based loans, in addition to mortgage loans, by income when coming up with the amount of loans that can be extended to borrowers. DSR, which was applied to the banking sector in October, last year, is now applicable in the non-banking sector as well. Tightened regulations have reduced growth in other loans by 800 billion won.

By Lee Sae-ha and Lee Eun-joo