Outbound shipments totaled $13.6 billion in the July 1-10 period, down 2.6 percent from the same period a year earlier, the Korea Customs Service reported Thursday. Monthly exports have been on a downward spiral since last December.

The pace of decline slowed from the previous two months when exports tumbled 13.5 percent in June and 9.4 percent in May. But this was because there was one more business day in the July 1-10 period compared with a year ago. When factoring in this factor, average daily exports were down 14.0 percent on year and up 32.3 percent on month.

Exports of ships slipped 16.9 percent and petroleum products 3.0 percent in the first 10 days of July. 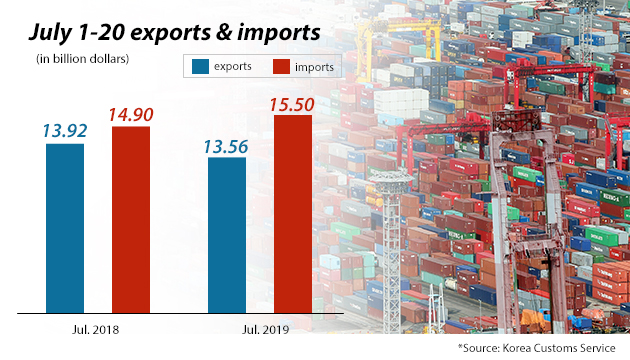 Exports to China, responsible for a quarter of Korea’s total shipments, remained subdued, sinking 13.2 percent on year. Shipments to the European Union and the Middle East also fell 10.5 percent and 20.3 percent, respectively.

Imports were tallied at $15.5 billion over the same period, up 4.0 percent on year.