이미지 확대
Tit-for-tat economic retaliation against Japan’s export curb would do more harm than good for both Korean and Japanese economies, with the expanded trade conflict dealing a heavier blow to the Korean economy, according to a study.

A 30-percent reduction in the materials necessary for chip production would translate into a 2.2 percent fall in Korea’s gross domestic product (GDP) and 0.04 percent for Japan, the Korea Economic Research Institute said in a seminar sponsored by the Federation of Korean Industries (FKI).

The loss in GDP would expand to 3.1 percent for Korea and 1.8 percent for Japan if the current trade conflict builds up to tit-for-tat actions.

The dent in Korea’s GDP would widen to between 4.2 percent and 5.4 percent if supplies from Japan become 45 percent short. 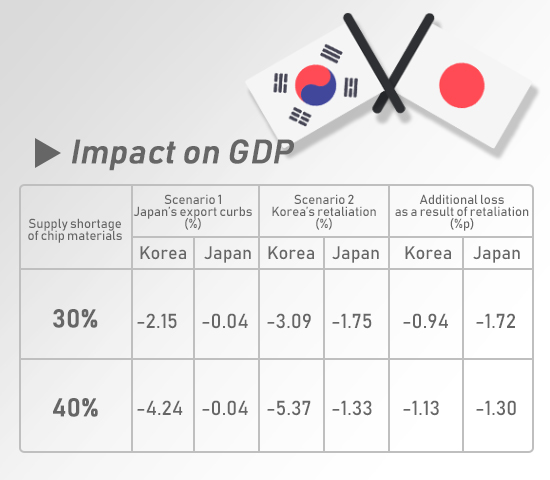 A widened conflict will hurt Japan less in the longer run as it will actively seek replacements for Korean exports.

A trade tension between the second and fourth largest economies in Asia will benefit China most.

The world’s second largest economy will gain from 0.5 percent and 0.7 percent. The institute added that Korean and Japanese production in electric and electronic sectors is projected to decrease by 20.6 percent and 15.5 percent, respectively, while that of China to increase by 2.1 percent.

At the seminar, Hana Institute of Finance said it won’t be easy for Korean makers to shift supply chain from their longstanding Japanese vendors as their IT competiveness hinge on precision and high-quality materials.