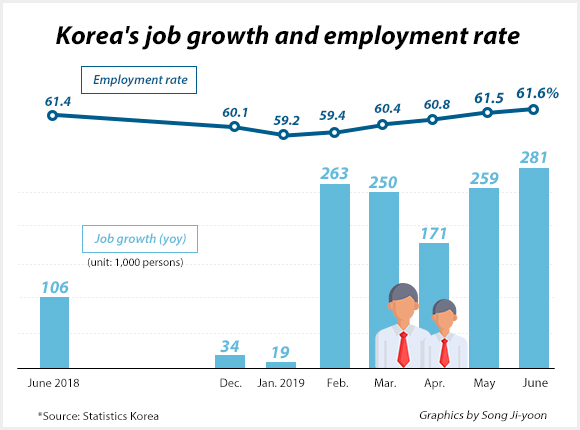 이미지 확대
South Korea added jobs at the fastest rate in 17 months in June on heavy government spending to create public-sector jobs that mostly went to retirees. But employment in the 40s as well as the manufacturing segment stayed sluggish, raising questions to the country`s job growth sustainability.

The number of employed Koreans in June was tallied at 27,408,000, increasing 281,000 from a year earlier, Statistics Korea reported Wednesday. The addition was the largest since January 2018 when employment rose by 334,000.

이미지 확대
Most of the hiring still came from healthcare and social welfare sectors, creating 125,000 jobs through government funding. Education services followed with 74,000, and accommodation and restaurant sectors with 66,000.

The employment rate for the 15- to 64-year-old age group, the standard of the Organization for Economic Cooperation and Development, edged up 0.2 percentage point on year to 67.2 percent, the highest June figure since Statistics Korea started compiling such data in 1989.

Total employment rate was 61.6 percent, a 22-year high. Employment rose in all age groups except for the 40s. 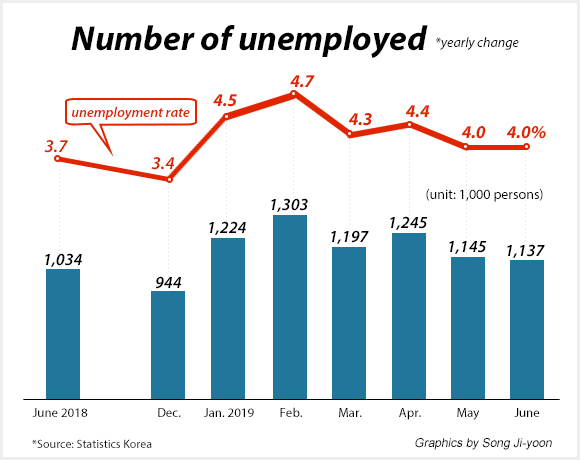 이미지 확대
Unemployment rate also rose 0.3 percentage point to 4.0 percent, in part because there were more elderly citizens working or actively looking for jobs as a result of the government’s senior hiring program launched earlier this year.

Unemployment among youth aged 15 to 29 climbed 1.4 percentage points to 10.4 percent. Both jobless figures were a record high for the month of June.

By Chung Seok-woo and Kim Hyo-jin