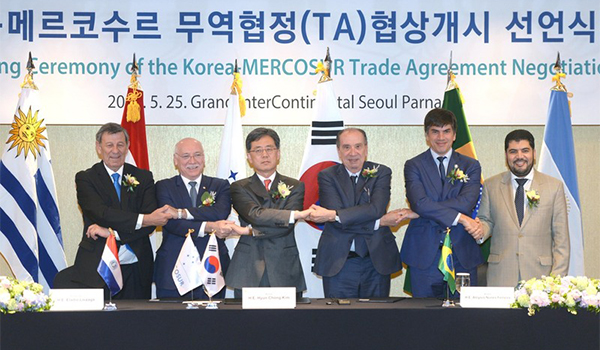 The Ministry of Trade, Industry and Energy announced Monday that a delegation of South Korean government led by Kim Ki-joon, director general for free trade agreement at the trade ministry, and consisting of representatives of ministries of trade, finance, agriculture and fisheries will meet with representatives of four Mercosur member countries – Brazil, Argentina, Paraguay and Uruguay including Valeria Csukasi, director general of Uruguay’s foreign ministry.

They have held two official rounds of talks since they entered the negotiations for the first time in May last year in Seoul. This time, the talks will cover extensive areas including goods and service exports, investment, intellectual properties, country of origin, Sanitary and Phytosanitary Measures (SPS), Technical Barriers to Trade (TBT) and government procurement,

The trade ministry said the government delegation will focus their bargaining power on achieving better terms for domestic companies to enter the countries than other nations.

Mercosur, officially Southern Common Market, is an economic bloc comprising Argentina, Brazil, Paraguay, Uruguay, and Venezuela. But Venezuela`s membership was suspended in 2016 for failing to comply with trade obligations. The region accounts for 70 percent or 290 million of Central and South America’s total population and 76 percent or $2.7 trillion of gross domestic product (GDP). Trade volume between Korea and Mercosur nations has been on a steady decline after peaking at $20.8 billion in 2011, but the figure slightly went up last year to $11.12 billion.