이미지 확대
South Korea has signed an in principle free trade agreement with the U.K. to make sure their trade relations remain unaffected when the U.K. leaves the European Union by the October 31 deadline.

The preliminary trade deal was struck by Yoo Myung-hee, Korea’s minister of trade, and Liam Fox, the U.K. international trade secretary, on Monday in Seoul.

“The deal is to cushion the risks from Brexit amid multiple headwinds from the escalating U.S.-China trade tensions and Chinese economic slowdown,” said Yoo. 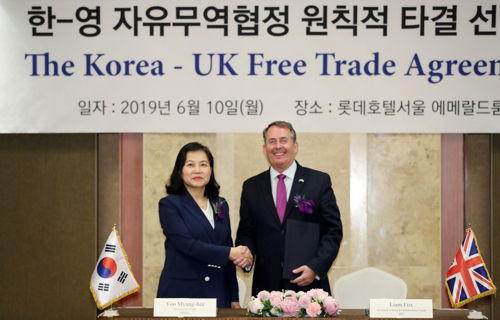 S. Korean Trade Minister Yoo Myung-hee (left) and Liam Fox, the U.K. international trade secretary, pose for a photo during a ceremony on June 10, 2019. [Photo by the Ministry of Trade, Industry and Energy]

The latest trade pact is a replication of the preferential terms under Korea’s existing free trade agreement with the EU, according to Korea’s trade ministry. The deal would ensure free trade relations between the two countries in all possible scenarios, including the event of a no-deal Brexit in October, Britain’s departure from the EU with a deal, and a Brexit extension beyond the October deadline.

The two countries now need to seek ratification from their respective parliaments before October 31. If the deal fails to gain approval in time, Korean cars and other manufactured goods that had currently entered the British market duty free would be slapped with 10-percent tariffs.

Some changes were made to the existing Korea-EU FTA in the latest bilateral agreement. Korea agreed to recognize Irish whiskey made on U.K. soil as British and impose a tariff-rate quota on just two U.K. imports, supplementary feed and the beer-making ingredient malt.