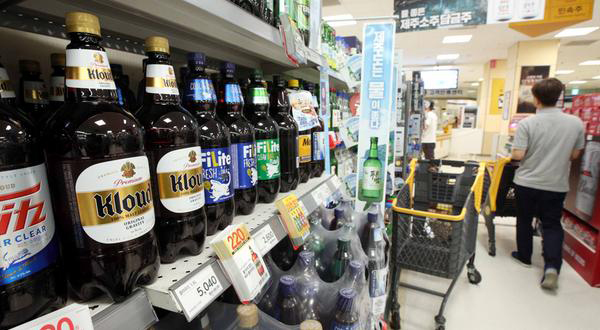 The South Korean government is out to change the taxing system on liquor for the first time in 52 years to tax based on the alcoholic content and quantity instead of price starting with light spirits beer and makgeolli, traditional rice wine.

The government – led by Ministry of Economy and Finance – said on Wednesday that it discussed a new liquor tax guideline with the ruling Democratic Party as a part of coordinating changes to next year’s tax code.

The government will reflect the changes in the system to its 2019 amended tax bill and submit it to the National Assembly for approval in early September before enforcement next year.

The switch in the country’s liquor system – the first since 1968 – involves levying tax on beer and makgeolli based on volume or alcohol content instead of price. The volume-based tax rate will be adjusted every year according to consumer price fluctuations.

Under the change, the government will imposes 830.3 won ($0.7) in tax for a liter of all beer, an amount driven after reviewing overall output and liquor tax over the last two years so that there is little impact in tax revenue.

Currently, Korea taxes 5 percent to 72 percent depending on the liquor type. Beer is levied with maximum 72 percent.

Although local beer is taxed on the warehouse price, foreign brands are saved of sales or profit levies as they are taxed by the registered import price and make them cheaper on shop shelves. 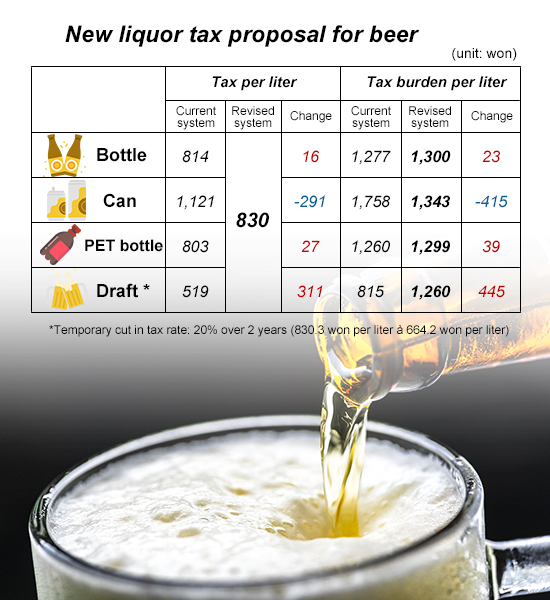 The revision is expected to bring most changes to tax rate in canned beer. Currently, a total 1,758 won worth of tax is collected for a liter of canned beer, including liquor tax, educational tax, and value added tax, but under the new system, tax amount will go down 23.6 percent to 1,343 won.

In contrast, tax levied on a liter of draft beer will go up from 815 won under current system to 1,022 won.

The government came up with the revision in the liquor tax system based on the principle that the new volume-based system applying to beer and makgeolli does not lead to a price increase. The new system, rather, will lead to a drop in tax revenue from beer by about 30 billion won and makgeolli 600 million won, about 1.9 percent and 3 percent lower from last year’s revenue.

“There have been limits to producing and developing high-quality liquor products under the current system,” said Hong Nam-ki, minister of economy and finance in the government-ruling party meeting. “There have also been complaints about fairness due to different tax rates levied on imported and local beer products.”

The government expected the switch in tax scheme to bring positive changes to the industry, such as job creation and new facility investment.

Hong said that more jobs will be created for young people once craft beer industry gets a boost. He also mentioned how an increase in local beer production will also lead to more job creation and new facility investment.

The government, meanwhile, will review changes in the tax system for other types of liquor products such as soju, distilled liquor, herbal liquor, and fruit wine, after studying the impact of the system change in beer and makgeolli and gathering industry opinion.