The country’s current account registered $660 million in red figures, a dramatic reversal from March number of $4.82 billion in black, according to preliminary data from the Bank of Korea on Wednesday.

The last time the country recorded a deficit in the current account was in April 2012 at the height of the European financial crisis.

The current account, which consists of trade balance, net primary income, and net cash transfers, is a major measure of a country’s external business.

A deficit was largely foreseeable due to the losing streak in exports since December as Korea endured blows from protracted and broadened trade war between the United States and China, Korea’s two largest trade partners. The country’s outbound shipments from January to April stopped at $185.8 billion, down 7.8 percent on year while imports shrank 5.3 percent to $160.5 billion over the same period.

The bust phase in the country’s mainstay export of semiconductors has also dented outbound shipments.

In April, exports fell 6.2 percent on year to $48.3 billion, extending loss for five straight months, but imports inched up 1.8 percent to $42.6 billion partly due to a rise in raw material costs and an increase in imports of electronics.

The surplus in goods account, as a result, shriveled to $5.67 billion in April, compared with $8.47 billion a month earlier and $9.62 billion a year earlier. 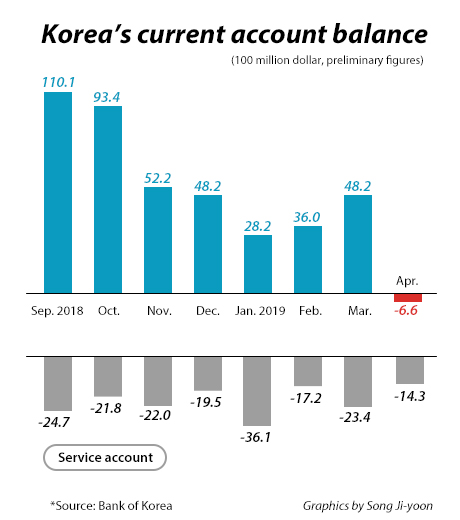 이미지 확대
A surge in dividend payments to foreigners was another major culprit behind the deficit, the central bank said. Primary income account deficit sharply expanded to $4.33 billion from previous month’s $7.4 billion, largely due to the seasonal increase in stock dividend payouts to foreign investors. The deficit in dividend income account reached $4.99 billion, the third largest ever and sharply up from $1.33 billion deficit.

Service account deficit in April narrowed to $1.43 billion, the smallest since December 2016, from $2.34 billion a month earlier and $1.98 billion a year earlier, thanks to an improvement in the travel account balance. Income in travel account reached $1.7 billion, the largest since November 2014, on growth in foreign visitors. Travel account payment slowed to $2.37 billion with a fall in the number of Koreans traveling overseas.